pauldyson1uk said:
Lewis Hamilton says a very uncomfortable bump that has appeared at Spa's Eau Rouge has "kind of ruined" the daunting corner, the Mercedes driver speculating that the issue may be linked to recent mudslides.
Then this crash , he could be right.
This crash was shocking

Damn. Thankfully everyone seems to be alright. Incredible they all walked away from a crash like that with just a little soreness.

ArjenIsM3 said:
Damn. Thankfully everyone seems to be alright. Incredible they all walked away from a crash like that with just a little soreness.
Click to expand...

senorgregster said:
The car coming in as the video ended is particularly bad. I hope everyone is ok.
Click to expand...

It was a scary crash, agred HALO saved a couple of lives, couple taken to hospital for precautionary checks

Dan said:
This is incredible.

Seems to be blocked?

have to watch on youtube.
It is very good, the ride is brutal.
Belgium GP Qualifying

wet qualifying , should be interesting.

It’s the lap of Spa from a camera on Alonso’s helmet.

Formula 1 has tweaked its 2021 calendar, changing several race dates and reducing the year's schedule from 23 to 22 events.

As the global Covid-19 pandemic continues to challenge race organisers, with Japan recently joining this season's list of cancellations, the sport's logistics are being challenged, forcing Formula One Management to integrate ongoing changes.

While the schedule remains intact up until the Russian Grand Prix in late September, Turkey, Mexico and Brazil have all been pushed back by a week, with Turkey therefore filling the previously TBA slot scheduled on October 10, which reduces the calendar to 22 rounds.

The race in Istanbul remains on F1's agenda despite the country still being earmarked on the UK's red list. But the latter is expected to be updated on September 16 by the UK government, at which point a final will likely be made on Turkey.

If the event is scrapped, Mugello could be slotted in as a replacement venue.

Formula 1 has a weekend open right after Brazil on November 21, and many expect the slot to be filled by Qatar's Losail International Circuit, but a second race in Bahrain is reportedly still being considered.

As previously planned, the season will end with F1's maiden visit to Saudi Arabia and the final round at Yas Marina in Abu Dhabi.


Stefano Domenicali, President and CEO of Formula 1, said: “We are very pleased to announce the updates to the 2021 calendar following extensive discussions with the promoters and national authorities.

"The pandemic continues to present the season with challenges but we have proven we can adapt and we are confident we can deliver a record breaking 22 races this year despite a global pandemic.”

"I want to thank the promoters in Brazil, Mexico and Turkey for their patience and flexibility and we will provide the details of the final addition soon.

"This season is proving to be an incredible battle on the track and this is hugely exciting for our fans around the world and we look forward to the intensity continuing in the races ahead." 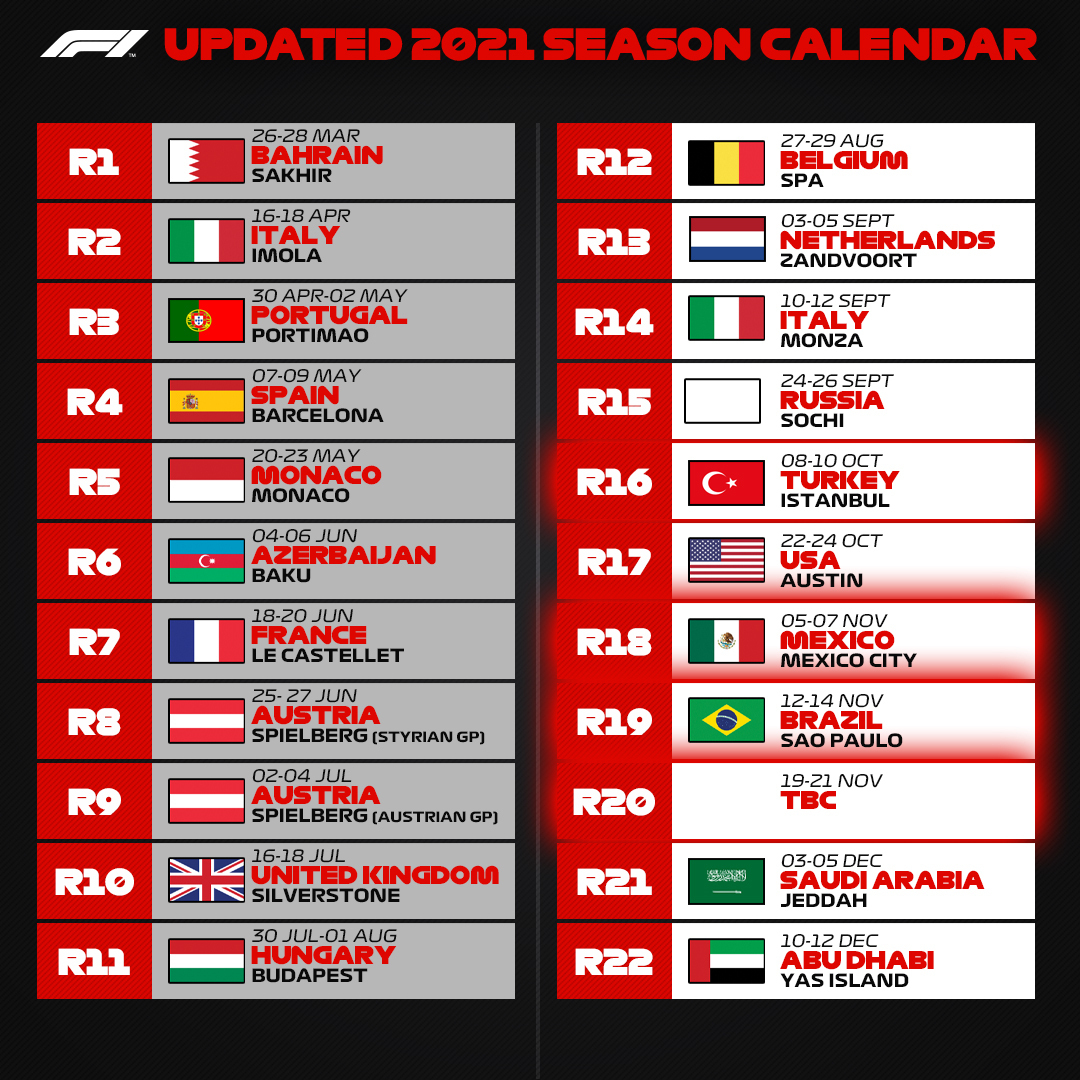 looking at the rain, could qualifying be delayed ?

Qualifying is not starting anytime soon.

Put simply, the rain is absolutely hammering down at Spa as we move towards the schedule start time of Q1.

"It's surely going to be delayed," says Paul Di Resta as the Safety Car takes on some laps.

Surely they should just qualify in the wet?

Fluctuation0161 said:
Surely they should just qualify in the wet?
Click to expand...

If it too wet , too dangerous, lots of standing water on the track.
Qualifying is delayed, not shocked to be honest.
There is no time on the delay.

Hope they don't let it dry out too much, its so much better when it's wet

Desperately hoping for a wet race, it makes so much more excitement, we finally get a wet race last time and look what happens

Hope we get proper rain tomorrow.

looking at the safety car, it looks OK in places and not in others.
Get them out I say.

looks like it could be, foggy start then rain all day.
https://www.myweather2.com/Motor-Racing/Belgium/Spa-Francorchamps-Circuit.aspx

most out on full wets.
Russell and Lattife on inters
Norris says inters will be needed pretty quick.

Mercs completely off the pace in the rain so far. Maybe their setup is geared towards dry weather = low downforce? What's the weather like tomorrow anyway?

ArjenIsM3 said:
Mercs completely off the pace in the rain so far. Maybe their setup is geared towards dry weather = low downforce? What's the weather like tomorrow anyway?
Click to expand...

same has today the forecast is saying

KNOCKED OUT IN Q1

Mercedes out of used inters, everybody out on new inters.

Why did Hamilton break off that lap? He was on purple

ArjenIsM3 said:
Why did Hamilton break off that lap? He was on purple
Click to expand...

what a shite Q2 for Lewis and Bottas

so Lewis and Bottas get thought, but by using more sets of inters than they wanted too.

KNOCKED OUT IN Q2

the rain is the worst I have seen it this qualifying.
Vettel says it is too wet and should be red flagged

Let's have some more of this weather tomorrow, forecast says 90% chance of rain for then too

Feck. I was really rooting for Lando to get his first pole. Hope he's alright.

V.O. said:
Let's have some more of this weather tomorrow, forecast says 90% chance of rain for then too

Not the rain now, it is far too wet.

Oh no Norris
X
Threadmarks
You must log in or register to reply here.