These are the highest ever sales from Serie A clubs 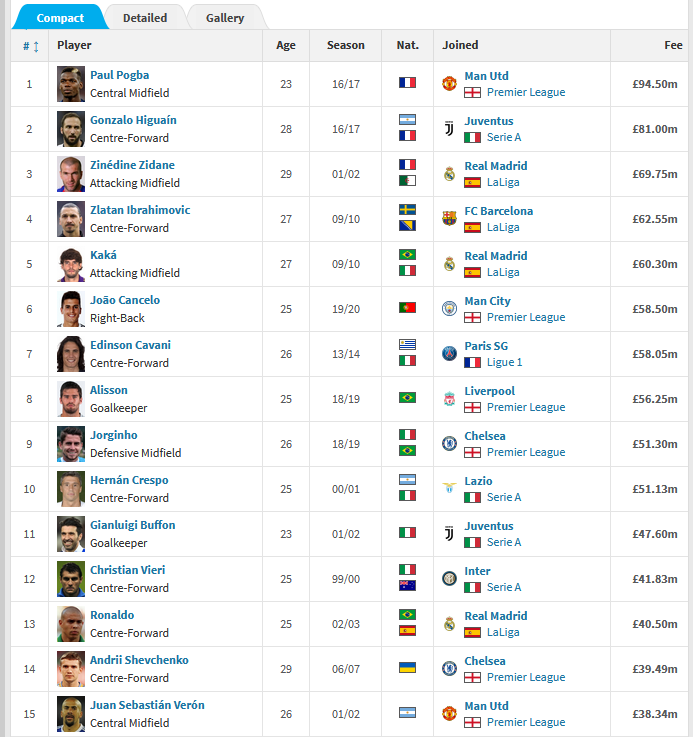 I think £55 million is about right for Chiesa

He's very talented and I feel he'll score and create alot more surrounded by better players. But what I really like about him is his bulldog like mentality which would really fit well with our dressing room. Below is a short interview from the player and he comes across like a very likeable player.

Ole seems to be going after the same players Pochettino was targeting at Spurs. Grelish, Bruno and now Chiesa to name some. He will be a good fallback option in case we don’t get Sancho.

If i am United nanager and DOF. And the mind behind Football version of Ocean Eleven. This boy will definitely get my call and convincing. The dream team if my Ocean Eleven is getting both of Chiesa and one of Sancho/Gnabry level/quality.

I like his fighting and never give up mentality. Aggressive and a hard worker. And he is really quick in the first metres. Explosive and really quick acceleration. High determination and a sharp finisher.

I have recommended this boy dozen times. Longtime before Ole got appointed as caretaker manager. He is just playing for a poor team this season. Just like Rashford and Martial playing for a struggling United.
Chiesa performance will be more consistent and better, playing with teammates like Bruno, Rashfor and Martial.

My dream line up with Chiesa. And reason to buy two wingers. It is to move Rashford back as a CF. Rashford is a natural CF, not a winger. And how many CF out there, young...are on the same level as Rashford. And what is the point keep playing Rashford as a left winger?And is James good enough as a left winger?Chiesa is clearly a half level better than James as left winger.
Chiesa is on the same level as Bruno, as a full packet football player. Chiesa is quick ball players, in both head abd feet.

If not with two CF. Then you can move Bruno up as the free nr.10.

Chiesa can play all over the attacking line. As a free nr.10 too. The position Bruno is playing now.

And again. Bruno was playing for one of the best team in portugal. Chiesa is playing for half bottom team in Serie A. And the defend in Italy are better than in Portugal. Reasons why you can’t expect that Chiesa should score and be as good as Bruno. And if you put both on the same level of teammates. Like Chiesa is playing for a top 4 team in the league. You will see his better impact.

Sum up. From my observations. From the days scouting him under U21 tournament. With the like of Fabian Ruiz of Napoli and Spain. Chiesa is on same level as Fabian, Olmo and other big talent on that tournament.
1 or 2 really good football players in a poor and average team. Will do not much. But with 4-5 really good football attacking players. Then we are talking. Talking about a top 4 level.
United have Rashford, Martial, Bruno....4 with Pogba...Adding Chiesa and one of Sancho/Gnabry level. Then we can talk and reach the level and goal of... winning the premier league trophy. Chiesa definitely has that level. Just put Chiesa on the same training pitch as Bruno. Chiesa will have the same confidence as Bruno. Chiesa definitely has the mentality, beside his high football skills and understanding.
Definitely one to go for.

My football version of Ocean Eleven. The Bruno call and convincing is done. Chiesa is definitely on one of the next on the list. Chiesa on the same team and line up as Bruno, Rashford and Martial. Reasons and line up to buy season ticket. And if you adding Sancho/Gnabry to that. The sum of this. Then we are talking about of the fastest and most powerful cars. United went from an average car. Adding Bruno...Chiesa. And Sancho/Gnabry. It will be too fast for most defend in premier league. Include Liverpool solid defend. Those boys will play futsal and quick five a side football on a bigger pitch. With a lot precise quick pass and movement football. You have to speed up to been able to handle them. I will not them stand still. They will move a lot and make if difficult for every defend.

Rashford, Martial, Bruno need at least 2 more attacking players on same level. Chiesa and Sancho/Gnabry. Then we can start to work and aim towards our goals. The biggest trophies in football. Get Chiesa with the right price and like Bruno. United will not be regret.

He'd suit us so well.
You must log in or register to reply here.