Cool, will do! Cheers

Ran away with the Championship and went up as champions. Badly misjudged the quality of my team though and add a terrible fixture list we fought bravely and hung on by the skin of our teeth.

I’ve had to just go get 2/3 quality players this year. Abandoning my profit policy for a season or two.

There shouls be an owner/DoF mode already. Where you can hire managers, while buying players and managing finances. Woodward 2k20

altodevil said:
There shouls be an owner/DoF mode already. Where you can hire managers, while buying players and managing finances. Woodward 2k20
Click to expand...

An older version of PES tried this. Obviously not as in depth as FM would do it but it was fun for a bit but then just got a bit mundane

Managed to win the title in my first year at Sunderland. Fair enough, not an overly impressive achievement, but it was tougher than I expected at times. We had 3 takeover attempts, which was a bit frustrating, was glad to see one finally go through. Spent no money in the first window, brought in a few 18 year olds on loan and focused on getting some of the players still on huge wages (after two relegations) out of the club, usually for pennies. Finally spent some money in January, managed to secure an addon-heavy deal for the leagues top scorer from Peterborough - Grigg and Lafferty could never stay healthy and goals had been a problem.

Biggest issue was that I couldn't keep anyone healthy and match fit - i'm not sure if this was because of low level coaches, or just because I had so many games. Even my kids had to be rested every few games. This caused a huge amount of disruption, especially with a very small squad.

Had long runs in every competition, which probably hurt the injury situation, I somehow managed to knock Brighton out of the FA Cup.

Not sure how season 2 in the championship will go, I had a lot of players who played well in season 1 and I managed to secure a partnership with United which should lead to some good players coming in on loan. Will be interesting to see if the new owners give me some money to spend.

Fun game so far, but juggling the injuries and match fit issues wasn't much fun. I wonder if this was related to bad physios etc? At the start of the season no decent staff would even talk to me, but I have gradually been improving the situation

FM20 sure loves an early goal. Maybe its just a quirk of this save, but I see first min goals all the time. Just went 1-0 down after 7 seconds

Location
Behind you. Stop picking your nose.

I keep getting goals disallowed for offside from freekicks.

Once in a while would be ok but it's happened 7 times in my last 4 games and 3 of them weren't even offside. 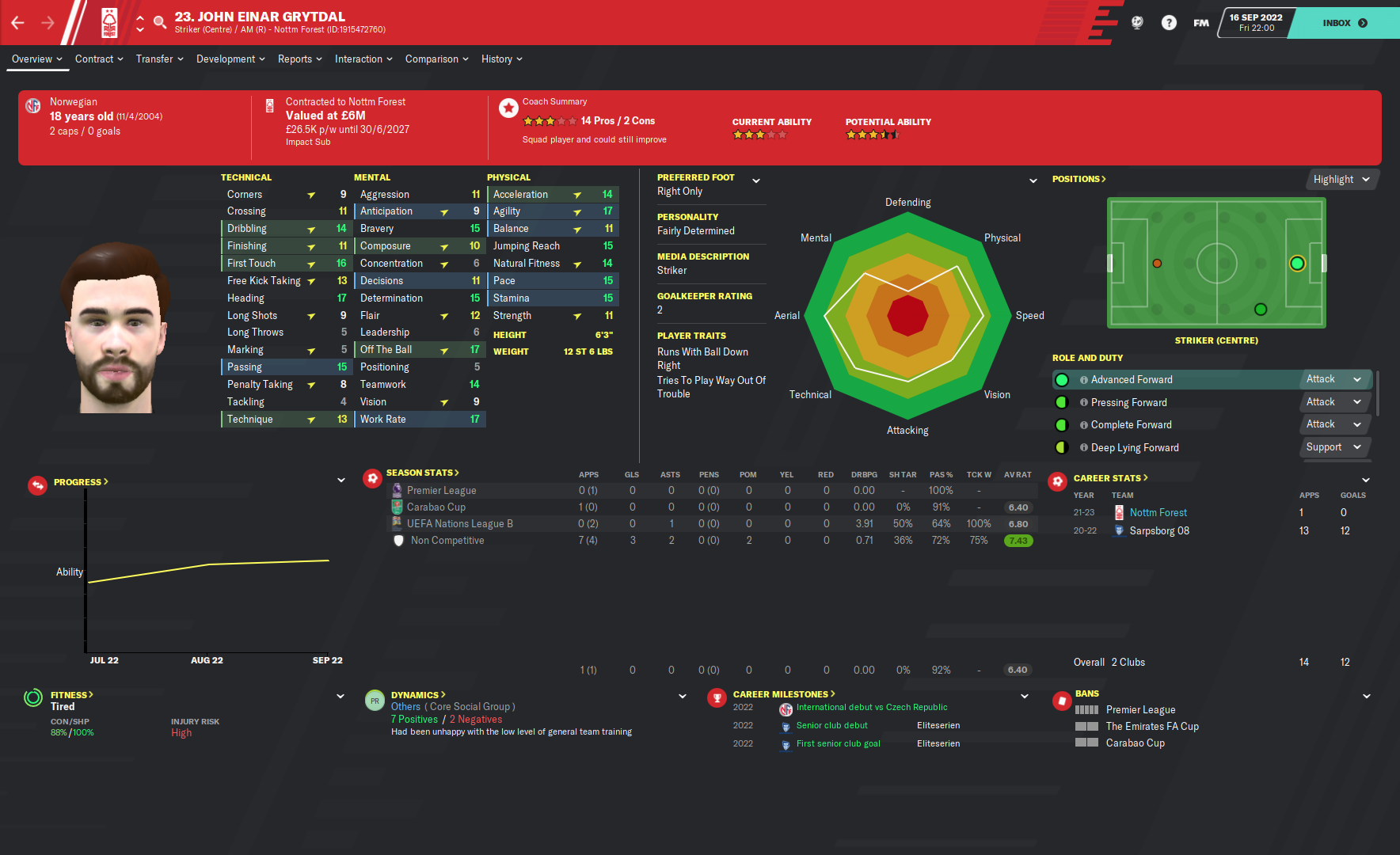 Just started a new save on 2019, De Ligt, Neves, Sancho all mine, unbeaten start let's have itttt.

I am hooked on FM20 in a way that FM hasn't gripped me in about a decade. My better half has been away all weekend and took the car with her so I was stuck in the house and ended up playing a lot of FM. I started playing on Saturday night, looked out the window and saw it was 3am - that hasn't happened with FM since I was a teenager.

I now have Sunderland in the premier league, two of the young 18 year olds I signed in year 1 are still in my team. The club is doing well, the board treat me like a god and I have been able to upgrade both the training ground and youth facilities. A few months ago the board announced that the stadium was going to be expanded to 60,000 seats. I still have the same owner from the third takeover attempt, but there are constant rumours of looming takeovers for some reason - always a consortium, so I doubt we are suddenly going to get a sugar daddy. (does that happen in FM? Can Norwich suddenly get taken over by a Saudi prince?)

The only problem is that my club reputation doesn't seem to have caught up to my new status. Players at clubs like Palace and Villa aren't interested in talking to me, even though I have plenty of money to offer in terms of wages. I have similar problems with the French league, keep getting messages like 'Player X is not interested in joining Sunderland as he would prefer to sign for Southampton' I would understand being turned down because they want to sign for City (who spend absurd amounts of money every year) but even lower mid table clubs?

My way around this has been to buy up a load of obscure but very talented 18 year olds, my bench and under 23 team are both packed with wonderkids from places like Bulgaria. If they are well coached I might suddenly have a title contending squad in a few seasons, but having to rely purely on young players is a bit frustrating. I was recently linked with some big jobs and have been offered the Everton, Rangers and Leicester jobs, but I would prefer to stay at Sunderland if my club status ever improves.

Greenwood has never made the breakthrough at United (who are in mid-table) for some reason, they play some guy I have never heard of upfront, with Martial as the backup and Greenwood gets very few games. I have been trying everything to get them to sell him as his finishing stat is crazy, but no luck yet
Last edited: Oct 12, 2020

One mistake which did punish me was messing with my keepers role. I noticed that he was supposed to be better suited to playing as a 'Sweeper keeper - attack' rather than as a standard keeper. I have never bothered looking at keeper roles in the past, but decided that if he was better suited to another role I might aswell try it.

Huge mistake! As soon as I changed it we started to concede a load of goals and got hammered in 2 straight league games. I changed it back and we started playing normally again.

Board and fan feedback is ridiculous.

Signed a 5 star potential midfielder as a 19 year old from Argentina for 5million.

Board and fans both say 'concerned about the finances to sign him.

2 years of loans later, i have no plans to put him in the team for the time being, Barca offer me 55million for him, i add in a 20% sell on clause....

Board and fans both concerned with the finances to sell him.

EvilChuck said:
Board and fan feedback is ridiculous.

Signed a 5 star potential midfielder as a 19 year old from Argentina for 5million.

Board and fans both say 'concerned about the finances to sign him.

2 years of loans later, i have no plans to put him in the team for the time being, Barca offer me 55million for him, i add in a 20% sell on clause....

Board and fans both concerned with the finances to sell him.
Click to expand...

I think the only transfer my board ever loved was when I signed Kieran O'Hara from United on a free transfer as he 'represented unexpectedly great value'. No shit, his contract expired.

All my decisions to loan out young players are apparently worthy of a mere C. The random 18 year Swiss CB that I signed for 1m in January and unexpectedly went on to start 17 straight games in a Championship title winning season got a B-

I noticed the board and random coaching staff seem to interfere a lot these days. I found a lot of bids for my younger players were being accepted and rejected based on what youth coaches thought. Quickly learned to take all the final say away from them when a very promising 17 year old RB in under under 23 team was sold to Everton without any input from me at any stage
Last edited: Oct 12, 2020

Finished mid table, but won the league cup and thus qualified for Europe - I thought this qualified as a strong season. At the end of the season my club reputation was still 3 stars and I was ranked behind Villa - who got relegated after finishing dead last.

Im not asking to be treated like Real Madrid, but its hard to take the next step when most players over the age of twenty are more interested in my rivals and my players are unsettled when the likes of Everton show interest

Really fecking pissed off. Finished my 4th season and I came 7th in the PL with my Forest team which I was really happy with as I'm trying to be as 'organic' with the whole thing as possible. Trying not to go totally overboard with signings but I have splashed on one or two. but for the most part, I've done pretty well.

So I was very pleased to qualify for Europe for the first time and apparently I didn't. Everton who finished in 10th qualified instead of me for losing in the fecking FA Cup final the cnuts.

I was almost about to punch my screen

I'm going to be so sick of Everton after the end of January....

NoLogo said:
I'm going to be so sick of Everton after the end of January.... 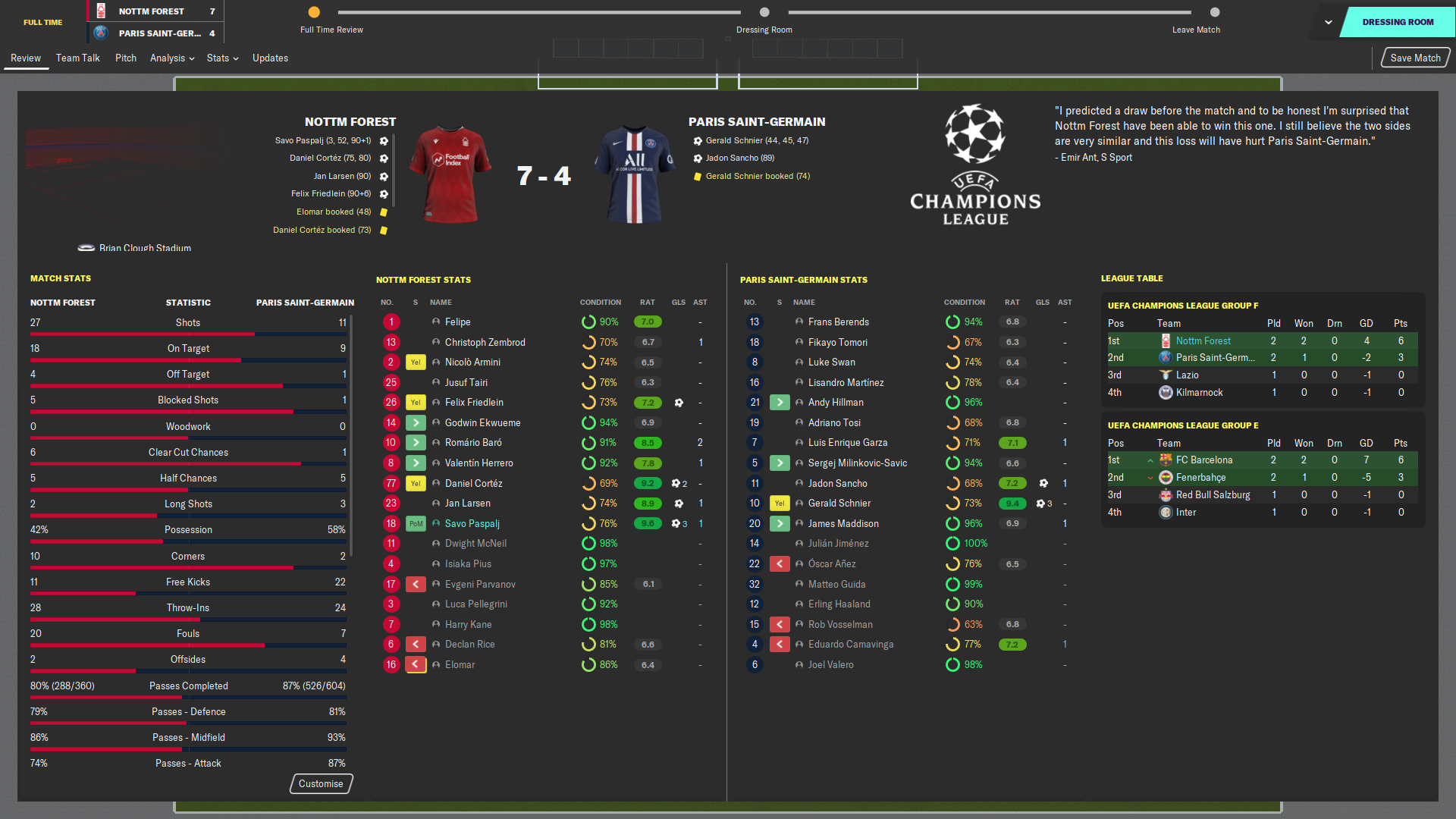 I know, it was almost like Ronaldo v United. All 3 goals were quality and I had to applaud. Luckily my main man Paspaij stood up to be counted

Started a new game as Blyth Spartans (I like to start from the very bottom and jump around building up a manager career). Despite expectations to be fighting relegation it turns out making the useless feckers play Gegenpress and signing a few loans was enough to put us in the top 3 after half a season and in definite contention for the title!

Getting really frustrated by how hard it is to offload players though. Had one guy transfer listed and in the U18s all season and he refuses to mutually terminate and no-one wants to take him for free. My 'star player' who I don't want is also unable to find a new club for love nor money. Tried offering younger players of value around and absolutely no interest from anyone. Fairly sure the only reason the board are letting me get away with running over transfer budget is because we're kicking so much ass in the league, but its making it so I can't bring anyone in because there's literally no wage budget available and no apparent way to get any more.

MattofManchester said:
Not really understanding much about FM21 this year.
Click to expand...

Kentonio said:
This is the FM2020 thread. My bad for bumping it..
Click to expand...

I honestly didn't even realize. My bad.