ATXRedDevil said:
“The National Bureau of Economic Research has stated that a 25 percent return on a venture capital investment is the average”

This is the reason I don't believe it:

and then I found this: (apparently published by Cambridge Associates) I honestly believe the VC landscape has changed significantly since 2000 and that is mainly based on my experience in the Valley. Angel rounds (pre-seed) should be also counted as venture capital and most of those (especially the ones that fail) are never accounted for in the stats. Looking at the chart above, the period from 1987-2000 was the golden age of venture capital. Not to mention the new equity crowdfunding rules that went into effect in 2016 (Obama's JOBS act) probably added more unsophisticated investors to the pool of VCs.

ATXRedDevil said:
There’s so much wrong with this post...

because capitalism has funded Abromavich and the Qataris’ takeovers of English clubs?

the vast majority of the club’s shares are held by Glazer affiliates, voting rights were always inconsequential as a result. The club just lost WKSI status because the public float (public shares held by non affiliates are valued <$700m). If you take the valuation of the club and do some basic math, you’ll see that the public shares represent far less than anything close to a majority, and when the majority is owned by a single group of affiliates, you shouldn’t buy shares if you have an issue with that. Securities laws are pretty clear about disclosure requirements for affiliate ownership. If you buy Man Utd expecting your vote to count, you’re a fool and didn’t do your diligence and read publicly available disclosure document to investors.

all that said, those shares do provide economic rights. Issuing primary shares in the public entity decreases the Glazers’ economic interest (which, to an average investor, is far more important than voting rights - especially if you research before investing and realize that this is a controlled company and your vote never mattered anyway...) every time the Glazers issue primary shares (which frankly, I’m not sure they’ve done, they’ve sold their own (secondary sales), but they bought those for their actual value and are well within their rights to sell the shares they own) they dilute their shares and their rights. Dividends have to be distributed equitably across the class of equity securities. So if they sell their own shares, they lose the dividends on those. If they issue new primary shares, the dividends on their shares are decreased because of the dilution.

I’m tired of the Glazers too, but this is an uninformed post.

edit: oh, about the leveraged buyout, this is how business works, unless you’re from a communist or autocratic country where you make your fortune on the bodies of migrant (slave) workers or strict autocratic socialism where a few families benefit from state ownership (see Qatar).

put me in the category that would prefer an owner that conducted a leveraged buyout over an autocrat that profits off of state ownership (corruption) or slavery. That said, the Glazers are shit owners no matter how they made their money.

edit again: I’m not even going to get in to your ridiculous notion about redemption rights on those shares u til you’ve actually read the prospectuses that describe the right of the holder of those shares. Go look that prospectus up and show me where it says they can be forcibly repurchased. Are you confusing equity securities with debt securities (the latter always having a repurchase/redemption right that’s disclosed in the prospectus and registration statement for said securities?)
Click to expand...

MackRobinson said:
This is the reason I don't believe it:

and then I found this: (apparently published by Cambridge Associates)

I honestly believe the VC landscape has changed significantly since 2000 and that is mainly based on my experience in the Valley. Angel rounds (pre-seed) should be also counted as venture capital and most of those (especially the ones that fail) are never accounted for in the stats. Looking at the chart above, the period from 1987-2000 was the golden age of venture capital. Not to mention the new equity crowdfunding rules that went into effect in 2016 (Obama's JOBS act) probably added more unsophisticated investors to the pool of VCs.
Click to expand...

Estimates of the returns to VC investments can be highly misleading because they typically reflect only those firms that have initial public offerings or are acquired by another company. Private companies are more likely to go public when they have achieved a good return. Those that do not achieve a good return are more likely to stay private or go bankrupt. Therefore, ignoring those companies that stay private only counts the winners; it induces an upward bias in the measure of expected returns for potential investors.

Before controlling for the selection problem, Cochrane finds very large average returns among companies that go public or are acquired. The average return is almost 700 percent. Returns in this sample are also very volatile, with a standard deviation of 3,300 percent. Underlying these averages, however, there are a few companies with astounding returns, and a much larger fraction with modest returns. About 15 percent of companies that go public/are acquired achieve returns greater than 1,000 percent; yet 35 percent of the companies achieve returns below 35 percent; and 15 percent of the companies deliver negative returns. The most probable return is only about 25 percent.

So, VC can get you 700% returns with 3,300% std deviation. That is inherently very risky from a return/volatility perspective. That's why the VC world is super-specialized in nature, with very strict investment criteria: specific industry sectors (SaaS, digital media, healthcare, biotech etc), stage (early stage, Round A, round B, C, D, E, F, G etc), geography, EBITDA range, revenue range, situations etc. This is before we get into valuation, term sheet discussions, form of capital, liquidation preferences etc. Not everyone can do it, and not everyone can/should allocate more than 10-15% of their total portfolio to it assuming they enough liquidity elsewhere.

Before 2000, the venture capital business was a bit of a cottage industry. In the last 15 years, VC has become an institutional asset class with the permanence and stature that brings seemingly endless amounts of capital to it. And so the returns have stabilized in or around the 2-2.5x over ten years number, which produces high teens/low 20s IRRs, which is enough to sustain the sector.

The only thing that I think would take us back to mean multiples of 4x or better would be some sort of massive reduction in the amount of capital coming into the venture capital business. And I don’t see that happening any time soon.

What do you reckon guys? Is soon the moment to spend all your money on United shares before they go up again? The cheapest it's been since United became a PLC, and it will continue spiralling downwards it seems! 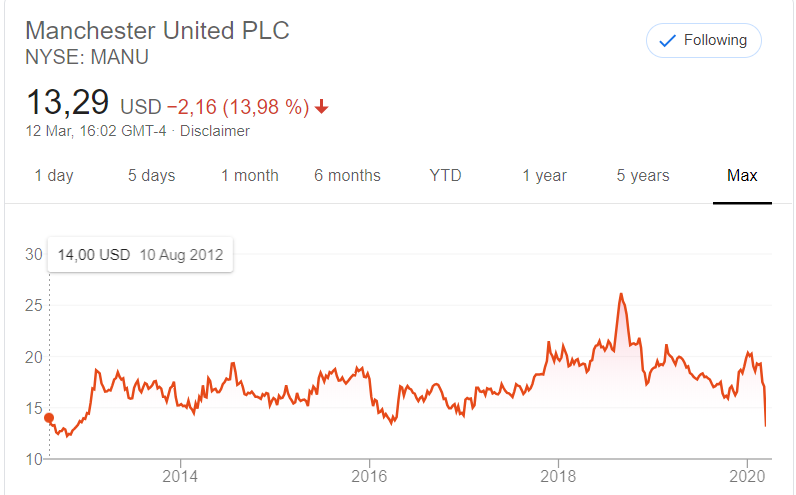 Chance if this goes on longer, which is a great possibility that they could sell.

Bojan11 said:
Chance if this goes on longer, which is a great possibility that they could sell.
Click to expand...

They should have sold a couple of weeks ago if they were smart! Can we hope for some mad drop like til $0.5? Then fans would have the possibility of buying a big portion of the club.

I thought these shares don't have voting rights etc, so fairly meaningless even if they all fell into the hands of a single person/entity?

MDFC Manager said:
I thought these shares don't have voting rights etc, so fairly meaningless even if they all fell into the hands of a single person/entity?
Click to expand...

Might be true, not that 'invested' in the stock market. Only been following United's share hoping it would plummet and force a sale.

Why would share prices dropping force a sale? Wouldn’t they wanna sell for the highest price possible? They would know this price dropping is extenuating circumstances and it’s not like they’re too poor to ride it out.

The market in general is in a mess. This is nothing.

Absolutely 0 chance they sell when they can wait a year and almost double the share price. Theyre not short of any money.

Adisa said:
The market in general is in a mess. This is nothing.
Click to expand...

This is the right answer.

RedCurry said:
This is the right answer.
Click to expand...

Yea. This can't be blamed on Glazer's. But it is a good opportunity for anyone looking to invest for the long term.
You must log in or register to reply here.