BlueHaze said:
What is this 2 year "consultancy" deal meaning? If it means he'll work in some sort of dof role I'm very pleased with that.
Click to expand...

I'd guess so. At least he'll have a big say in footballing matters. Well I hope.

Swedish_Plumber said:
Who’s he making the biggest impact on in terms of play style in our squad then?

Donny for sure will be loved. High energy, can press and can pass. Fred would be ideal also but he cant pass.

Man of the crowd

The consultancy part is very interesting - and all in all this package is much more promising to me than hiring a permanent manager straight away.

Could it be that Murtough actually knows what he's doing?

Relevated said:
I believe Ronaldo must sacrifice the amount of minutes he plays, or he will have to adapt his style. There isn't really an alternative, what do you think would be the solution apart from dropping him all together?
Click to expand...

The other option is the manager adapts to having one of the best strikers in the world, and sets up a system with him that works. I'm sure it's possible.

Does anyone know if this a hands-on coach who takes training, or one who delegates?

sglowrider said:
I was excited when we hired Van Gaal which only shows how little I know.
Click to expand...

I rememeber when Van Gaal came to manage us. There was so much controversy about him, and so many were advising its gonna turn bad.

We need an rvn

Location
somewhere in the sussex downs

I like the appointment, but looking at his history - what has the guy actually won? Great playing attractive high pressure football but if he's not won anything then do his tactics actually work?

I wonder how pogba will fit in a salfordpress?

roonster09 said:
Yeah, also looks like he will play a role in which coach we will hire next. One more positive is (yeah i'm looking for positives) we won't be doing any short term deals just to get through this season. He will be part of the club for next 2.5 years so he might play good enough role in shaping the squad.

Will be interesting to see how the work rate changes for few of our attackers, especially Rashford, Greenwood and Sancho.
Click to expand...

Definitely! Having him there to move things in the right direction and start laying the groundwork, approaching things in a holistic manner with an eye on the future will be really beneficial, as opposed to having someone come in to see out the season who could be fundamentally different in their approach and disconnected to the permanent manager who follows them, and would probably be focusing on their 6 months rather than having a vision past that.

Yeah he will definitely be useful in playing a role in choosing the manager, he's obviously been very influential for many of the current generation of managers and will have a very good insight for United to rely on. Have you got a preference at this point?

It will be interesting, I sometimes wondered if it was tactical but then seeing Cavani's incredible workrate when he'd be next to Rashford I was a lot less sure about it being a tactical thing. I think if they commit to it, especially Rashford still only 24 and Greenwood and Sancho being very young, these players who are already very talented could go up a level and this United side could be a pretty fantastic watch

Carrick's new manager bounce should last another game or 2...then Ralf can add a second bounce immediately before the first subsides...holy feck it gonna be a huge bounce.

Hold onto your hats lads.

Nice. I have no idea if he'd any good as a manager but apparently he has improved clubs in how well they're run? So that's probably a good thing for a club like ours. 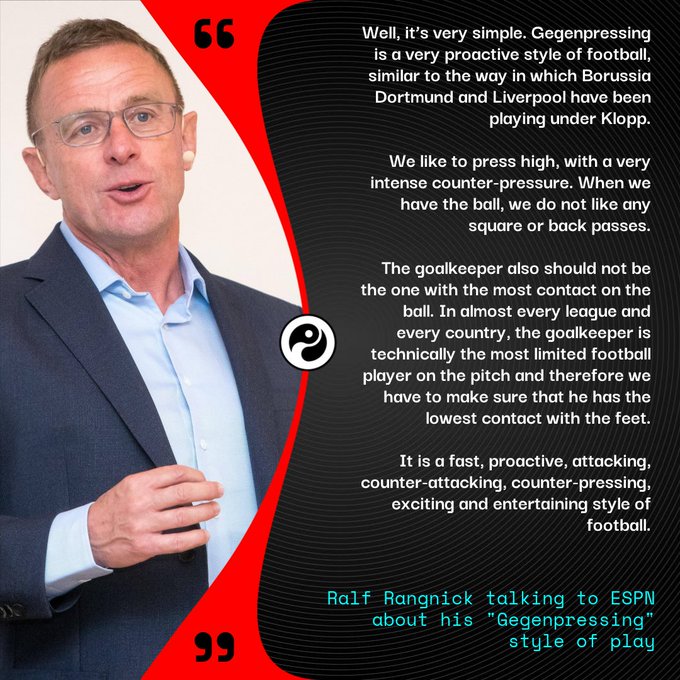 That's very interesting. Not what's the norm right now right? With pressing and high line with a sweeper keeper. And the GK is required to be good with the feet and an integral part of build up and beating the counter press. Interesting.

Got to say that it is an exciting move, I was dreading Rodgers.

Swedish_Plumber said:
Who’s he making the biggest impact on in terms of play style in our squad then?

NoLogo said:
I know him from his Bundesliga days quite well. More a squad builder DoF than a fantastic head coach, so I wouldn't expect any immediate fireworks. His sides are usually very disciplined defensively, I could even imagine him playing a 442 counter attacking style, he is not very possession orientated.

Apparently, we gave him a 2-year contract after this season as an advisor. Half measures, but I hope he can teach Fletch and Murtough a thing or two about how to pick the right coaches and players.
Click to expand...

Yup - People should probably temper expectations for this season. This is all about giving the club some direction. I can't see how his influence wont be a good thing. He's instantly the most qualified football person at the club. Yes even more than SAF.

That said he could improve us significantly just because the setup we had previously was so incompetent. It makes the rest of the season pretty unpredictable. This is definitely a great step.

Ralf Rangnick at the reel.

Signed Ronaldo, Sancho and Varane, Ole gone, Rangnick as an interim and then in consulting role, most likely Ten Hag permanent manager in summer! Stars are aligning for united.
Last edited: Thursday at 16:40

The consultancy part is very interesting - and all in all this package is much more promising to me than hiring a permanent manager straight away.

Could it be that Murtough actually knows what he's doing?
Click to expand...

They actually have made the right decision?

The decision making from the club has been getting and better for a few years now.

I think some fans need to update their material. Still judging the club on what was happening five years ago.

what does a 2 yr consultant mean? We won’t listen and keep you on retainer but out of our sights if need be?
Click to expand...

Maybe transition into DOF? I'm very excited about this. Hope he lays the foundation for Ten Hag and then moves upwards to do for us what he did for RB Liepzig.

VeevaVee said:
The other option is the manager adapts to having one of the best strikers in the world, and sets up a system with him that works. I'm sure it's possible.
Click to expand...

Pexbo said:
well done for not reading it.
Click to expand...

Was trying to make sense of that too!

I like the appointment, but looking at his history - what has the guy actually won? Great playing attractive high pressure football but if he's not won anything then do his tactics actually work?
Click to expand...

He has developed the most fascinating, captivating, efficient brand of football that you have seen in recent years. Thats what hes done.

Holy feck it's refreshing to see some decisions that have some thought and oversight put in.

So are some of you still annoyed we missed out on Conte? I'm calmer now

Wasnt aware of him before, fair enough and hope he helps transition to a longer term manager, hopefully Ten Hag.

We need an rvn

Location
somewhere in the sussex downs

Wreck-It Ralph is at the wheel..

Holiday is over boys. Time to sweat for your paychecks now.

BlueHaze said:
What is this 2 year "consultancy" deal meaning? If it means he'll work in some sort of dof role I'm very pleased with that.
Click to expand...

yes this corporate speak, companies do this all the time when executives struggle. Murtough is never going to let his title go or shows signs that he's needs help, hiring a consultant sounds much better than hiring a tutor. And we get to keep in house as an interim manager, in case the next one pulls a Moyes.

This is good, isn't?

I know we're all giddy and I don't wish to dampen the mood, but i'm just wondering why he hasn't managed any top team in Germany (or even outside of Germany)?

Solius said:
Can someone detail what type of manager he is? What kinds of players and systems he likes?
Click to expand...

Invented gegenpress. But didn't perfect it. Hence his lack of trophies.

That being said, this was the last season he managed a team: 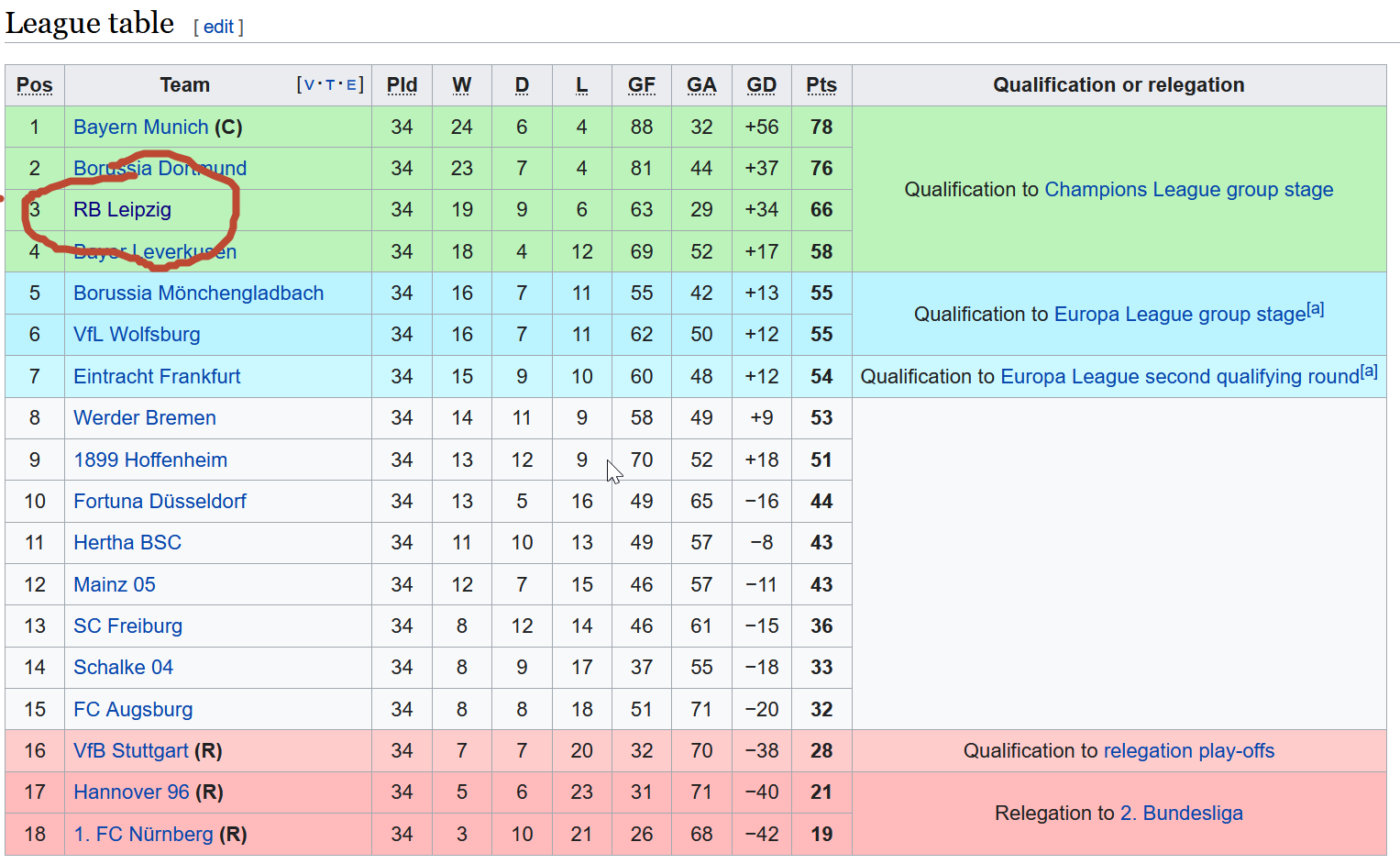 If he can sort out our defence like with RB Leipzig, our attack should still have enough quality to score a shit ton of goals.

red4ever 79 said:
Brilliant news, followed him for a long time and no doubt his influence and style of play can be seen in the modern game.


Hopefully the coaches are shown the door.
Click to expand...

Love this. Not sure if we have the right personnel for gegenpressing type football but should be exciting

Godfather said:
Does Poch though? I haven't seen that high press in this PSG team at all. Might be down to those lazy fecks up front but still. Think Ten Hag would fit very well.
Click to expand...

Of course, both his Southampton and Spurs teams both pressed relentlessly, it was his trademark.

What an appointment. Looking forward to seeing how this plays out.

True False moron in the mud
Click to expand...

Тhe replies in the thread are priceless

Not getting my hopes up until he's officially announced.

Can Anderson score? No.

We need an rvn said:
DDG - heck, our entire central midfield is fecked - Fred, McT and Matic
Click to expand...

He will love how active Fred is tbf
Threadmarks
You must log in or register to reply here.