Not RAWK but the same level of delusion:

sglowrider said:
Not RAWK but the same level of delusion:

“We have more songs to sing than anybody”

This is a forum who thought Sinama pongalle and Pennant is better than Ronaldo. So what do you expect in case of Fernandes ?

VeevaVee said:
“We have more songs to sing than anybody”

big rons sovereign said:
I can think of just 3. Yawn, that shit about Salah, and the droning liiivveerpoool, liiivveerpoool....
Click to expand...

You are correct but don’t forget:

Location
There is no spoon.

I'm ready for some salty tears

We could not have asked for a more beautiful way of Leicester getting the equaliser.

Agent No Name, you are cleared for entry.

Ready for this..
It's going to be good.
What will they blame this time.

arthurka said:
Ready for this..
It's going to be good.
What will they blame this time.
Click to expand...

Just wanted to wish everyone who brave the trenches of the 502 gateway error good luck. We're counting on you.

jeez liverpool. I mean i knew gaygen pressing is unsustainable over long period of time but this is beyond funny now.

Rustyspider13 said:
Just wanted to wish everyone who brave the trenches of the 502 gateway error good luck. We're counting on you.
Click to expand...

I second this. The heroes we don't deserve, but the ones we need.

I have to admit this Liverpool decline is kinda funny.

it's a mute point

second match in a row they've completely thrown away. You love to see it.

I am more ready than a well cooked Turkey!!

Alisson is a beautiful human being.

Chief123 said:
Alisson is a beautiful human being.
Click to expand...

"I call him the Brazilian Barthez"

NoLogo said:
I have to admit this Liverpool decline is kinda funny.

It sure is. Was bound to happen. Thought it would be next season tbh. 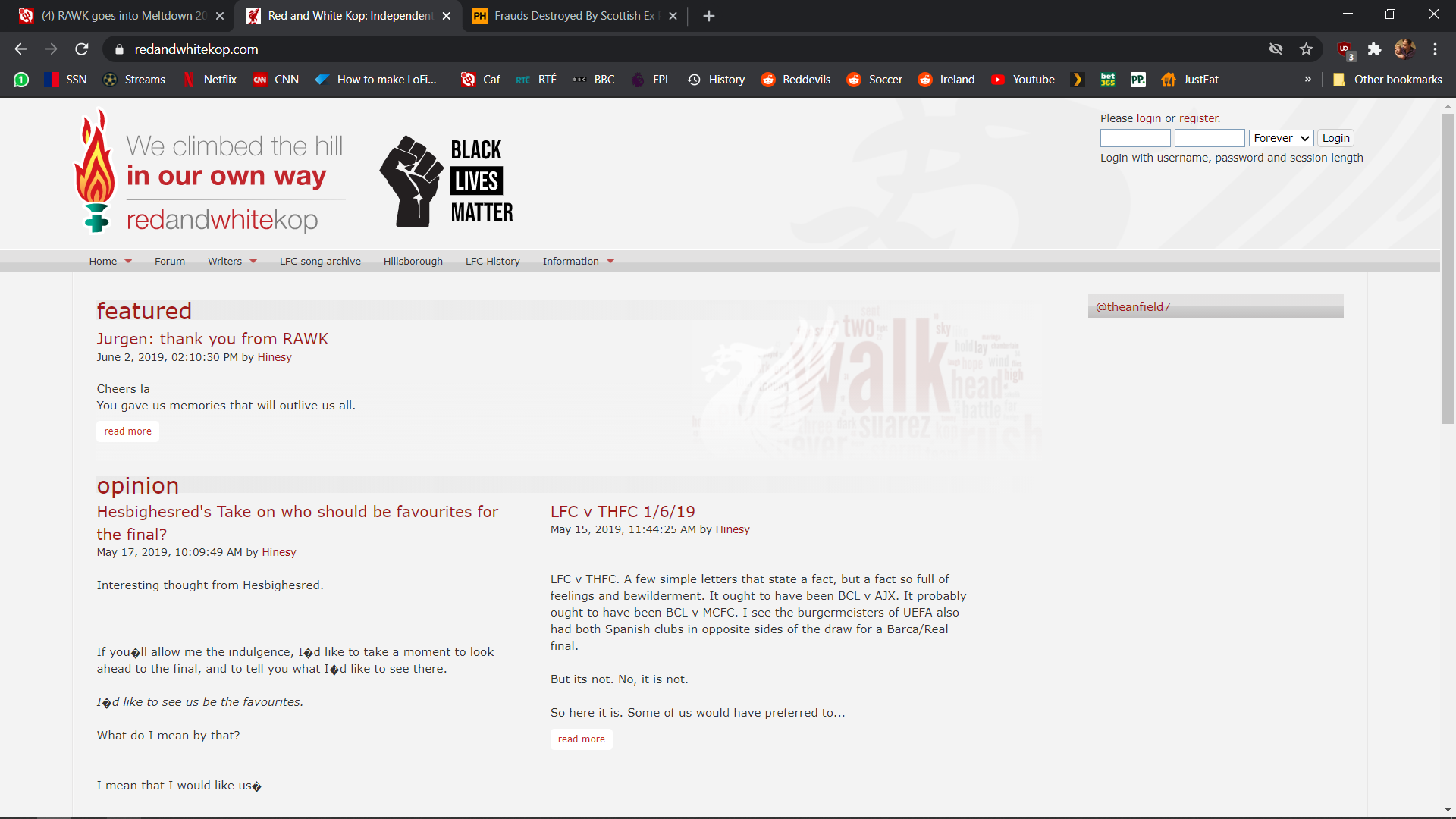 Atleast they seem to have fixed the issue of the site not imploding whenever there team does.

Atleast they seem to have fixed the issue of the site not imploding whenever there team does.
Click to expand...

We climbed the hill in our own way

Hoof The Ball said:
We climbed the hill in our own way

So cringy. Why do they always have to be so extra special about everything they do?

What's the even point. I'd love it if Klopp just said it like it was and pulled them team off, said "feck your league" and then instigated going to a European Super-League.

I was always against it, but it's clear Liverpool have to leave the Premier League.

When you see so many fecking joke decisions in so many games, then you have to draw the line somewhere.
Click to expand...

People in the media will criticise the team, but I'm still fuming about the atrocious VAR decision. Without it, the implosion doesn't happen.

Ultimately, I'm very much of the opinion that we were the better team today, Leicester were immensely lucky and we were ultimately robbed. Nothing anyone can say will change my mind.
Click to expand...

I am actually amazed that Anthony Taylor is allowed to ref our matches
Click to expand...

Horrible refereing, soft freekick given all over the pitch, Kabaks yellow was truly mindboogling.
Click to expand...

The game’s rigged I don’t care what anyone says, offside decision was a joke and clear foul on Mane before their second. Ridiculous.
Click to expand...

Location
Looking over my shoulder.

Hoof The Ball said:
We climbed the hill in our own way

How many ways are there?

NoLogo said:
So cringy. Why do they always have to be so extra special about everything they do?

It's so bad. It's like they're saying that they chose to not win the league for 30 years because they wanted it to do it their way.

Another ref to the list that aren't allowed to ref their games.

They will be playing without any refs soon!

Marginal decisions against us are given constantly
For us there's no chance of it being given
Click to expand...

I hate to say it but there is something deeply wrong happening within our club right now and I don't know how we resolve it.
Click to expand...

There are no words for what's going on at the moment. Shit decisions, by us, against us. Shit performances. Totally shit circumstances. It's just a shit season.

Football is just an abject farce. feck.
Click to expand...

loss to everton and kicked out of europe wouldn’t buck the trend
Click to expand...

Think we can be genuinely concerned about CL qualification now.
Click to expand...

Take away the error.

The first goal shouldn’t have stood and Mane is pushed before the 2nd.
Click to expand...

Don't know why we keep insisting on taking Jones off for chamberlain everytime. Weve collapsed in the last 2 games making that sub
Click to expand...

They didn't need to play well to win just rely on the refs awful decisions and VAR will do the rest.
Click to expand...

Easy enough to play against us now. Sit back while we wait for the front three to do something. Don't worry about our midfielders because they don't do anything anyway. Just wait for us to collapse, it will happen soon enough.
Click to expand...

Ox came on and we lost 3 goals in succession.

While Jones was slow he managed to keep the shape. Ox destroys whatever left in our shape.
Click to expand...

Cannot see us finishing top 4 at all. Mentality has gone. We used to react to adversity and conceding, now we let it consume us. Kabak looks like a tractor when we needed at least an Audi.
Click to expand...

Rossa said:
How many ways are there?
Click to expand...

"Allison is a beautiful human being. "
Threadmarks
You must log in or register to reply here.