Spurs Documentary: All or nothing

Globule said:
How do people generally feel about these documentaries. Would you want us to have one?
Click to expand...

I'd love an insight into the club like that

The worse spurs get the more exciting this becomes.

One worry I do have is that these Amazon docs seem a lot less like a fly-on-the-wall documentary and more like propaganda.
The Sunderland series was brilliant as they didn't try and brush out the comical errors and failings - you really got a sense that it was Netflix making the show about Sunderland, not for them. I watched the Leeds one on amazon and it just felt like something Leeds had commissioned to make them look good, rather than being a true honest look at how the club is ran.

Sandikan said:
Imagine titling a documentary about a team who have won 1 trophy in 12 years "All or Nothing".

They need to think about "something" before they even dream of "all"
Click to expand...

Try 1 in 20 years, nothing in the last 12 seasons if we include this one. By the end of next year it'll be 2 trophies in 30 seasons, both of which were the League Cup. Pitiful really. We had 8 tropyless seasons and were roundly slaughtered.

The last proper trophy they won was 29 years ago.

sebsheep said:
You should really spoiler the ending.
Click to expand...

This.
This is gonna be a dumpster fire.

Globule said:
It's just an ongoing series of documentaries from Amazon, where they spend a season with a sports team and film a load of behind the scenes stuff. Started with the NFL in 2015. Done 5 seasons in the NFL, spending a year with 5 different franchises. Also done seasons with the All Blacks rugby team.

Also just found out that they've got one with the Brazilian national team.
Click to expand...

I see. I thought the initiation was done from the club side and not Amazon.

yumtum said:
This reminds me I still have to watch the Sunderland one.

Why do crap clubs feel the need to do this? It'd be like Blockbuster releasing a series about their fight with Netflix?
Click to expand...

I’d watch that though..!

Location
On the Kop

It's called All or Nothing due to the series starting off in the NFL where you quite literally win All, I.e the Superbowl, or Nothing.
The City one was good and I have really enjoyed the NFL ones. I also liked the US college football team they covered.

This has the potential to be highly entertaining for non-Spurs fans and I can't wait to watch it. There's a Spurs fan on Facebook who told me I wasn't a proper fan as Liverpool were a successful team at the moment and I was glory hunting. The fact that I sat through many years of us winning feck all didn't suit his narrative. I was also told that the Champions League final in Madrid meant more to him than it did to me as we've won the Cup loads and just seeing Spurs in the final was good enough for him. Needless to say, I fecking hate Spurs and am excited about their impending demise.

On a side note, Amazon wanted to make this series about Liverpool but Klopp turned it down. I think he even said that if the owners ever green lit a documentary, he'd walk.

el3mel said:
Gonna be the most underwhelming documentary every done. Won nothing in this period and will have their failure from this season as well.
Click to expand...

Underwhelming? It's going to be brilliant!

For everyone but Spurs fans, that is

No longer at risk of being mistaken for a Scouser

el3mel said:
Gonna be the most underwhelming documentary every done. Won nothing in this period and will have their failure from this season as well.
Click to expand...

Sunderland Till I Die was brilliant because they were not successful

Location
On the Kop

If this documentary is no good expect Jose to blame the producer, the director and the viewers.

Needham said:
If this documentary is no good expect Jose to blame the producer, the director and the viewers.
Click to expand...

They didnt spend enough on production

Always good to read about Jose being unhappy but is there a worse website anywhere than ESPN? Reading any of their articles is a frustrating chore.

Speedy30 said:
Needless to say, I fecking hate Spurs and am excited about their impending demise.
Click to expand...

ValenciasDrilledCrosses said:
I'm guessing Spurs will have final say on what goes in, so it might end up quite puff piece-y but there's so much drama that's gone on with them this season there's bound to be some good content. I can only imagine all the footage they've captured. Hoping it's not just a Levy propaganda piece
Click to expand...

If it's anything like the City one, it will be
2nd clip

The music makes this so impossibly werid. it's not exactly Al Pacino in Any Given Sunday

Tom Cato said:
The music makes this so impossibly werid. it's not exactly Al Pacino in Any Given Sunday
Click to expand...

Eriksen’s not a fan at all

Jose's not a real person im telling you

Hope they don't put all the best bits in these clips. This could be the best all or nothing yet.

The meme potential is through the roof on this. I’m just glad it’s not at our expense.

I am not sure it is possible for Spurs to be more cnuty than they already are.

Jose: "You can not be nice. For 90 minutes you have to be a bunch of cnuts"

....Also Jose: "A team with 11 @GlastonSpur 's would win the Champions League"

Anyone else think that just comes across as really cringey and cheesy from Jose? I can now see why he’s lost his magic if that’s how he’s communicating.

Also Poch’s Spurs were probably the dirtiest, most cnutish side in the league at times. 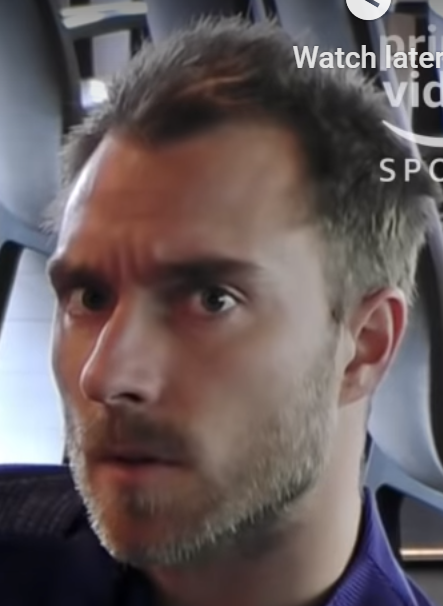 It's somewhere between plotting murder and seeing a ghost.

The older Eriksen gets the more he ends up looking like Johnny Sins with hair.

BluesJr said:
Anyone else think that just comes across as really cringey and cheesy from Jose? I can now see why he’s lost his magic if that’s how he’s communicating.
Click to expand...

It sounds like his hearts not in it at all

What was it? It is deleted now. I am always late...
Threadmarks
You must log in or register to reply here.