The Dutchman is a winger, who likes to cut inside and operate centrally. He is quite a versatile attacker, having played as a secondary striker and even as a false nine during his time with PSV Eindhoven.

Bergwijn is proficient in drifting past defenders using his trickery and acceleration in the final third. He has averaged nearly three successful dribbles per game this season – more than any other Manchester United player this season.

And thanks to the nature of his gameplay, the 21-year-old often finds himself in such a position, where it becomes easy for his team to initiate a counter-attack. This could prove to be priceless for United, considering how they have struggled with Romelu Lukaku’s lack of form.

The PSV starlet has a good positional sense as he often tends to be at the right place to make the most effective run.

This becomes prevalent especially in wider positions where the 21-year-old often uses hold up play in order to allow the full-backs to make overlapping runs down the flanks, which tunes in well with the brand of football Manchester United have shown under Solskjaer.

But most importantly, it is Bergwijn’s productivity in the final third that makes him a good target for the Red Devils.

The Dutch international has averaged 2.4 key passes per game, which shows his creativity, and he averages 2.9 shots per game which reflects his ability to get into good positions to test the ‘keeper.

Considering all his abilities, he’d be a good fit at Manchester United.

From what I saw on YouTube, he is a pure LW and 75% of the chances he creates and goals he scored are after cutting in from left side so he can use his right foot.

And to be honest we don't need a new LW, we need cb, fullback, dm and a RW.

He reminds me of Depay. However in videos seems he likes to play on the left side, not right.

He is at his best on the left and obviously would not be an improvement on Martial.

Backup to Rashford and Martial, I'd be fine with it, we need left-footed player so badly.

He can play both as RW and as LW. I don't mind us replacing mata and sanchez with him and cengiz under

On the rare occasion where I have watched PSV and NL, he was good. If the fee is good, it's a decent gamble.
Last edited: Jan 20, 2019

SWE-Chucky said:
From what I saw on YouTube, he is a pure LW and 75% of the chances he creates and goals he scored are after cutting in from left side so he can use his right foot.

And to be honest we don't need a new LW, we need cb, fullback, dm and a RW.
Click to expand...

Why not push out the boat for Leon Bailey instead?

I don't see any place for Bergwijn at United at the moment.

BAMSOLA said:
Why not push out the boat for Leon Bailey instead?
Click to expand...

If Rashford is now being considered as a number 9 only (which he should be) I wouldn't be against us bringing in a young prospect to give Martial some competition.

Alexis for me needs to be sold. I don't want him upfront for us, on the left before Martial so that only leaves RW where he's barely played at for years and apparently isn't keen playing there either. He's been a huge flop for us sadly.

BAMSOLA said:
Why not push out the boat for Leon Bailey instead?
Click to expand...

They want 100 mill for him apparently

He plays on the right just as much as the left. 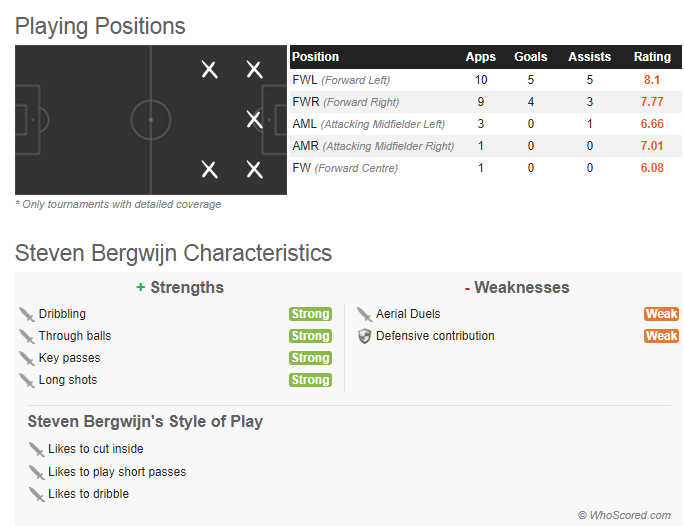 I really hope this is not true. He seems exactly like Depay when he was at PSV. I don't think he would succeed.

Agent/club using us to get a better deal

Nick7 said:
Agent/club using us to get a better deal
Click to expand...

Nah him and his agent are probably trying to get out of Holland.

He isn´t slow, he lacks a bit of burst at the start but he isn´t slow by any means.
Still don´t see why we would sign him.

Keeps It tidy said:
Nah him and his agent are probably trying to get out of Holland.
Click to expand...

yeah I meant from another club

Hope it's just rumors. We don't need him.

I'd rather we go for Hirving Lozano. Plays on the right more often and I think he's better.

arthurka said:
He isn´t slow, he lacks a bit of burst at the start but he isn´t slow by any means.
Still don´t see why we would sign him.
Click to expand...

That's the most important aspect of pace. He doesn't look like he has that burst of speed over ten yards. That's a huge reason Memphis struggled and why Malcom looks so ordinary.

Nick7 said:
yeah I meant from another club
Click to expand...

Definitely I see this ending with him signing for a Sevilla, Lyon, Hoffenheim level club in the summer.

Walters_19_MuFc said:
He plays on the right just as much as the left.

from the highlights he seems right footed mostly and a classic cut in from wide which would make the left side his better nominal position. Tends to turn when he has to use his left to whip a cross in.

He may or may not be any good but I just don’t trust performances in the Dutch league as an indicator of how good an attacking player is.

ArjenIsM3 said:
I'd rather we go for Hirving Lozano. Plays on the right more often and I think he's better.
Click to expand...

I think Bergwijn's ceiling is much higher. Made tremendous progress over the last year.

But i do agree there's no place for him at United at the moment. He has a similar playing style to Martial, but isn't at his level (yet).

He looks really raw, nowhere near ready for the PL. He's also very right footed, he wouldn't be good enough straight away to come in and displace Martial from the team. Unless we sell Sanchez and buy him, he'd cost a pretty penny I'm sure.

From the video he looks like a player we might have been watching in case Martial didn't re-sign.

His speed of thought and quick feet when dribbling reminds me of a young Ronaldo/Nani, but he has more unpredictable flair like a Quaresma. Doesn't appear to have the technical ability of those guys and much of what he does lacks control or composure (especially his finishing), but he looks a real talent. I particularly like that he seems quite unselfish and has an eye for a pass.

Seems like he could be a great squad player for us currently.

Powerful shot on him too. A pretty decent highlights reel for a 21 year old. Id say he's an upgrade on Lingard with the potential to be a starter. Looks like a fine talent. We need individualists and he's certainly that.

`personally I think he hasmore potential than Lozano

I think he could become a great player but i also think we dont need a LW who likes to move towards the centre. Not sure about Lozano, good player but Bergwijn looks like the more talented player. Both will be sold for a lot of money though.

I always thought he would be better than Memphis because Memphis was all about speed and strenght when he played in the Eredivisie but Bergwijn has a better technique. I think ive read stories about him that people at PSV also rated him as a higher potential than Memphis. However Memphis in France became a pretty good player...

The 'problem' with Bergwijn used to be that he didnt score or assist very often even when he played well. That has changed now and he is scoring and assisting. Memphis started to score and assist earlier. I think that has been the main difference and why Memphis was a bigger name when he played for PSV

He's not the answer to our RW issues, as someone else said, we don't need him ATM, maybe, if god forbid Martial leaves he could be an option.
You must log in or register to reply here.
Top Bottom