PeteManic said:
How is that WWE now. Please give some examples.

Not sure on Santana and Ortiz' age

They are still building :

Jungle Boy - Has a win over the main heel MJF, he's 23 and most likely the future is those 2
Luchasaurus - His tag partner, another big guy who can do lots of stuff 35
Private Party - I think they're both mid 20s, have a win over the Young Bucks
Ricky Starks - Cant find concrete info but seems to be mid 20s to 30
Kip Sabian - 28
Anna Jay - Just joined the Dark Order as their first female member and choked out Brandi, 22
Tay Conti - Anna's tag partner in recent tournament, seemning also joining Dark Order faction that have the TNT title, 25
Britt Baker - 29
Penelope Ford - 27
Kris Statlander - 25

Otis - Money in the bank contract, 28


Older guys who come in and have been in the main event angles this year :

WWE obviously has some younger roster members, the problem is Vince giving them a push, it lasting more than 2 or 3 weeks without deciding that they failed and seeing them on the same level as these people above. AEW have given the newer faces that people wouldnt have seen on national television before Dynamite more (big wins, main events, higher profile feuds) in the short time its been around than most of these guys got in several years in WWE.

PeteManic said:
How is that WWE now. Please give some examples.
Click to expand...

Thats the news. Just look for it and you'll have reports of Vince coming in most weeks, seeing whats written and throwing it away and doing it himself.

Ekeke said:
Thats the news. Just look for it and you'll have reports of Vince coming in most weeks, seeing whats written and throwing it away and doing it himself.
Click to expand... 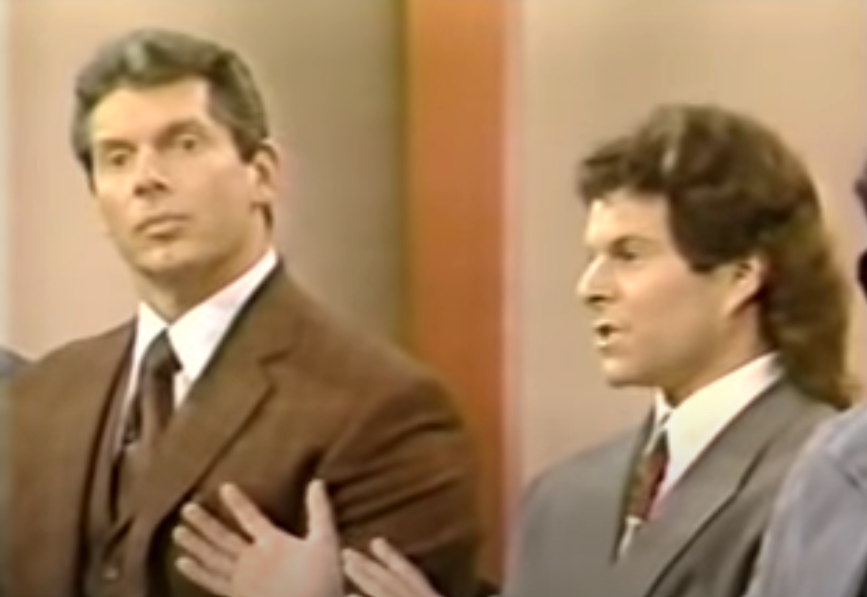 Meltzer is the IndyKaila of wrestling. That people take his word as gospel and treat his star ratings as sacred text is fecking sad and hilarious in equal measure.

Shane88 said:
Meltzer is the IndyKaila of wrestling. That people take his word as gospel and treat his star ratings as sacred text is fecking sad and hilarious in equal measure.
Click to expand...

His star ratings certainly shouldnt be considered the be all and end all. Its supposed to be more of a fun thing. I don't think he's miles off often, but I would certainly dispute a bunch of his ratings. I'm pretty sure he has a bias towards Charlotte Flair for example, perhaps because he's such good friends with Ric.

But when it comes to news, particularly news in the US, Meltzer has a better record and sources than most. He also had a friendship with McMahon during the time period above and regular conversations with Vince trying to keep him onside. So he A) knows the man, and how he books/does things and B) is in contact with others who also know and work with him.

When RAW Underground was done before

I mean if you're going to use cornettes insult at least get it right?

WWE is the land of the aged. It's basically turned into WCW

If you watch their WCW Monday night wars documentary, everything they accuse WCW of doing which put them out is what they are doing now
The only difference is the huge tv deals

Dominik Mysterio is great. Wonder if WWE gonna try get aaliyah in too

I really like how they've used McIntyre,l and lashley for most of the year.

Nxt super Tuesday tonight. Should finally get a new champ. Could see them going for Finn though am wondering if / when we see Demon back.

reverse inverted I guess is that flipped upside down so 9161.

Felt like a tna impact moment with a former WWE guy debuting and talking indirectly about the former companies ceiling and such...

Thought they were avoiding picking up ex WWE stars but here we are. Should be noted that bar the women's champ, all their champions are former wwe champions

SalfordRed18 said:
Anyway, for what it's worth, I'd be very interested to see rusev in AEW. Good for him.
Click to expand...

Same, I think hes a good pickup too. From the mass firings WWE recently had, I think AEW only picked up four or five people (including a ref). And its been spaced out so its not the worst thing. But I get your point with the current champs.

Re: Rusev/Miro I also thought his delivery was good, its just the content...

Conti was announced yesterday as well. Moxley as their world champ, Lee as their mid-card champ and those two generic create-a-wrestlers as their tag champs.

Do AEW have any idea on presentation? Big debut and he walks out in a Mickey Mouse t-shirt plugging his Twitch.

Conti was announced yesterday as well. Moxley as their world champ, Lee as their mid-card champ and those two generic create-a-wrestlers as their tag champs.

Do AEW have any idea on presentation? Big debut and he walks out in a Mickey Mouse t-shirt plugging his Twitch.
Click to expand...

To be fair, I think signing people like Moxley, The Revival and Rusev makes sense... they're quality/entertaining acts who have shown they can get very over and/or put on very good matches. I think they should start skipping the Zach Ryder's, Ty Dillenger's of the world though... that's very much an old TnA kinda thing to do.

Amazing they've still not done that much with Omega (relatively speaking)... you'd have thought he'd be their biggest star by now.

Good coincidence that he got hired on Rusev day

And now Rusev in AEW mud show shit with a crap name and crap everything.

As long as they make Allin, MJF, Jungle Boy, Sammy.G and Hangman their biggest starts soon.
Sammy.Gs natural story is to turn on Jericho eventually imo (but Allin should rise at the same stage as him).
Jungle Boy and MJF kinda need to have on / off feuds but MJF winning the title by end of year / start of next year would be good.
Hangman does his stuff with Elite / Omega.

Rusev was always going to go to AEW, and I think thats a move that suits both parties. Although it did look like he'd just arrived from the beach with an hours notice.

I did like him in WWE, but I think he was criminally overrated. As I did with the Revival and Luke Harper.

They seem to be the guys who AEW are itching to snap up, the ones who twitter decides is underused in WWE. They won't go for Brock, AEW, because the smarky fans don't like him.. Or at least thats how it feels to me. Would be interesting if they'd go for Roman was he ever to be released, i'd suspect not.

Whereas people like Cesaro, Naomi would be snapped up almost immediately I think.

I don't know, it just feels like they're pandering to 'expert fans' who claim to be superior because they 'understand' wrestling better than people who like John Cena, Roman Reigns or Braun Strowman

They are getting the guys that WWE didn't use them right and they are using them right. What's the problem?

Matt Cardona isnt signed, he's just doing some shows like Jeff Cobb did. He may sign... I wouldnt want that based on his matches so far. Jeff Cobb I would want to sign.

Rusev is a no brainer. Someone who was popular with WWE's 50+ audience, while the 50+ audience is where AEW has much lower ratings. Its also funny when fans of WWE who watch the shows regardless of their lack of quality complain about another company signing someone who was popular in WWE. Oh no now I have to watch, thats somehow bad for AEW. People like Tye Dillinger... Thats more of a problem... I mean he's in good physical shape but the best thing he has going for him is that he's married to Peyton Royce which is impressive for him.

AEW are supposed to be getting their 2nd (main) show fairly soon. I guess thats why they feel they can still sign a few people, the roster is getting too big for 1 main show + dark.

Conti has a lot of potential, did very well against Nyla.

R.E.D. said:
They are getting the guys that WWE didn't use them right and they are using them right. What's the problem?
Click to expand...

Sylar said:
Guess this depends on their short term and long term impact on helping aew grow
Click to expand...

Well I think we can say so far so good. Jericho and Moxley have been great for them as a main eventer. And most of the other guys that are ex WWE guys have been good on the midcard. And Rusev is just great. I think we all love him.

They are just good wrestlers and characters that Vince wasted. I hope they do well in AEW.

NXT are getting over 800k, not been getting over that since December. It’s best for both brands and fans to have them on separate nights

paulscholes18 said:
NXT are getting over 800k, not been getting over that since December. It’s best for both brands and fans to have them on separate nights
Click to expand...

For those that think Jericho isnt a big draw or that Sonny Kiss never has a chance to get over
Click to expand...

I mean if you're going by quarter hour, Lee and Rhodes drew more. So you can pick and choose to fit a story, ultimately though the whole show did a great number.

Still think Moxley is the big draw for AEW though.

We know it was due to Hager anyway

MJF Vs Moxley did the same as Jericho Vs Moxley on ppv. Mjeff is the best

It was a great promo by Truth,

Ending to RAW was a bit strange, was that a face turn by the hurt business

Looking like Smackdown is WWE’s no1 show, RAW didn’t even get 1.7 million viewers Monday and smackdown had over 2.2m

It was a great promo by Truth,

Ending to RAW was a bit strange, was that a face turn by the hurt business
Click to expand...

I dont think it was a face turn. I think its just them being badasses. TBH, i actually enjoyed Raw. Not sure ive said that for a long time. Normally I skip a lot of raw, but there were things that intrigued me to watch.
-Ive enjoyed the stuff with the Mysterios (the daughter checking up on Murphy was interesting too)
-I kinda like Raw Underground even though its a bit scrappy at times and ultimately useless so far.
-I really enjoy the Hurt Business and think Lashley has been booked fantastically well. Do wish they would move on no instead of the never ending feud with Apollo but it looks like they are now which is good.
-Myintyre is great. Im mixed on what theyve done with Keith Lee. hes at the top level (so far) but it could have been so much better. His new music still sucks.

Wont happen, but the Show would be about 10x better at 2 hours like all other shows are.

paulscholes18 said:
Looking like Smackdown is WWE’s no1 show, RAW didn’t even get 1.7 million viewers Monday and smackdown had over 2.2m
Click to expand...

Yet were the top non-NFL show on TV.

Enjoyed AEW, show seemed to go by quick as a flash. But. Thats up to the main event... I always pause and wonder if I really want to make the time to watch Best Friends matches. Sometimes I do, often I just dont care. They arent for me
You must log in or register to reply here.