Evening, boys and girls, ladies and gentlemen, Forev and Weaste, and welcome to the RedCafe Annual Awards 2011. The votes have been cast and counted, bribes accepted and spent and all that remains is to announce the winners. If you don’t see your name on the list don’t worry, it either means you aren’t even good enough to get recognition on an internet forum or that you actually have a life outside of this place. So you’ve got that, that’s safe.

But for those of you who have won, just remember that as a very famous mentalist once said, “Fame is a mask that eats into the face”. Winning tonight might make you feel like you’re ten feet tall, your head will be filled with thoughts of important or glamorous parties (that you will never be invited to) or that you might one day be able to have full sex with a woman but I’m here to tell you that won’t ever happen. The only thing a RedCafe award gets you is recognition from a bunch of people whose greatest achievement is having the internet (and also 15% off in participating Little Chef restaurants).

We’re going to try get through these reasonably quickly and you’ll see that for a few of them we haven’t bothered doing two presentations as the same person has won two pretty similar awards and/or we couldn’t be arsed doing another one for them. Good luck to all involved and remember; there’s always next year. For most of you.

Fade to black with some Black Eyed Peas song playing in the background. Probably that one about getting things started, but they're all good really.

Can I rush the stage and scream 'Free Suarez'?

Yo Brophs, Brophs, I'ma let you finish, but Kid Cunto was one of the worst newbies of ALL TIME!

Good Craig got his c'nuppins

R_Nick said:
Yo Brophs, Brophs, I'ma let you finish, but Kind Cunto was one of the worst newbies of ALL TIME!
Click to expand...

R_Nick said:
Yo Brophs, Brophs, I'ma let you finish, but Kind Cunto was one of the worst newbies of ALL TIME!
Click to expand...

What is the meaning of this blasphemous misspelling?

"Winning is a relative term"

cold-zebra said:
What is the meaning of this blasphemous misspelling?
Click to expand...

I voted for you as best banning.

There is no such thing as a Kind Cunto

R_Nick said:
I voted for you as best banning.
Click to expand...

You can suck on deez nuts!

don't pretend you get the joke

EspadaYdaga said:
don't pretend you get the joke
Click to expand...

I get the joke!

Please someone explain me the joke...

So we're going to start with what is as much an ode to keeping a careful eye on your mental health as it is about an award on an internet forum.

The award for Biggest Liar

Ways to win an argument about Justin Fashanu:

1. Have a well thought out, compelling argument which considers all of the salient points and offers a very reasonable basis for agreement.

2. Say “He was alright by me, I don’t mind bummers, black or not. Once they stick to their own and stop catching aids from chimpanzees and that. And anyway, I know three gays and none of them have tried to fingerbang me while I was asleep”.

3. Claim to be black and then, under almost no pressure, admit you were lying all along. At this point you should suggest cryptically that in fact you were making a deeper, satirical point and that everyone who read your idiotic lie was at fault, not you, as it was their prejudices which lent absurdity to the whole situation. Then the next morning claim that you were drunk, as if that’s the same thing as being mentally unwell. Then get yourself banned for something stupid, though that may not be related.

The winner of the award for the Biggest Liar of 2011 is TheMancRedDevil.

Next year is my year.

Edit: In general. Not just for that award.

Still think Allforone should have won that.

Worst of the best

I'm not home yet. I am posting live and exclusively from a train. Someone post that Lenny GIF for me

Since I'm not going to win anything and TMRD isn't here, Can I have my moment of glory and accept it on his behalf?

Pizza slices for one and all

Supports
this year is my year on SM

Tonights gonna be a good night...

JayWalker said:
Since I'm not going to win anything and TMRD isn't here, Can I have my moment of glory and accept it on his behalf?
Click to expand...

Sit down mate. I'll tell you what that reward REALLY is all about. You don't want any of that.

Decotron said:
Pizza slices for one and all

I hope you didn't pre-heat that hairdryer!

Decotron said:
Pizza slices for one and all

Did you preheat the iron before doing this? Because its better if you preheat it, and its in now way the sign of a man who likes sucking cocks...

Still think Allforone should have won that.
Click to expand...

Me too. Both worthy winners though.

SteveJ said:
I hope you didn't pre-heat that hairdryer!
Click to expand...

Who would preheat a hairdryer? He should be preheating the iron

SteveJ said:
I hope you didn't pre-heat that hairdryer!
Click to expand...

Skywarden said:
Sit down mate. I'll tell you what that reward REALLY is all about. You don't want any of that.
Click to expand...

With Brewlio involved, I know what everything is all about. 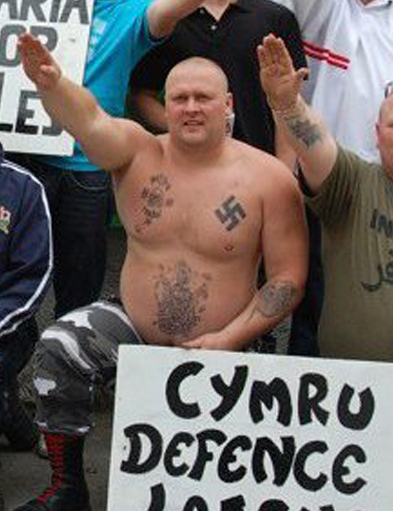 Well you've got to hand it to nev. The guy's consistent year in, year out no matter what you think of him. From the Utd Forum to the Current Events and the right the way back to the General.....it doesn't matter where rednev pops up, but one thing is for sure..he'll be outspoken, he'll be controversial and he'll be xenophobic bordering on the cusp of racism with every electronic utterance with his spastic Welsh hands.

Whether it be the death of Bin Laden, bailing out Ireland, the death of Kim Jong-Il, good old Mrs T, religions, the war on terror, the Falklands or just the price of lollipops in the local corner shop you can guarantee that rednev will be there to give his either wummish or racist agenda stance on things.

Many years ago rednev graduated in some weird twisted Welsh university with a first class honours degree in Islamophobia and regards himself as one of the leading authorities on all things middle east, with much of his work focusing on how middle eastern countries, their people, policies and cultures are all wrong. But it doesn't stop there, no siree. The Irish are thick, the English are thicker. Should he be permanently removed from the CE for continual racist and spastic remarks? No he shouldn't, he's a racist spacker for sure, but he's our racist spacker. He often saunters into the General to mix it up with the ethnic minorities and his hatred of each and every one of you is apparent. If rednev had his way he'd have each and every one of you's shot.

rednev said:
People should be allowed to deny whatever they want. What right does anyone have to tell anyone else what views they can hold on history?
Click to expand...

^ As you can all see, the Holocaust was just a big conspiracy for rednev.

Still think Allforone should have won that.
Click to expand...

Claiming that you're a black just too win an argument takes lying to a whole new level.

Good Craig got his c'nuppins

Well deserved.
You must log in or register to reply here.