This thread is dedicated to Tweets that refer to teams other than Manchester United that are in England and Scotland only. For other Tweets, please use one of the other Transfer Tweets threads.

Anyone not following the rules will be warned and eventually permabanned from the thread.

DON'T
Rules of thumb:
Aggregators
Aggregators are Twitter accounts that collect news and reports from various media outlets and publish their summaries/key tidbits. They always refer to the source but often do not refer to the original article/news passage. They very rarely, if ever, post their own information; if they do, they prepend their Tweets with an "Exclusive:" or similar. Also, unfortunately, several aggregators (including some very popular ones) tend to alter the original info to either fit the content into a Tweet or sensationalise the original report. This is why it's imperative for everyone to provide the original source when posting anything from an aggregator. Aggregators also do not care about the quality of the source; they often publish Tweets containing info from unreliable sources.

Use the aggregators to either summarise the original source's info or translate the info from a non-English source. Basically, treat an aggregator like Wikipedia: use it to become more aware of what's going on in the football world, but recognise that it is not a reliable source of information.

The Caf now has its own pair of tier lists (one for United sources, and one for everything else). You can find them and more here. For your convenience, here is the list of banned sources (as of 24 January 2023):

It's not a bad move for Hayden. He was a serviceable player in the PL, but he won't be good enough for Newcastle's ambitions for next season. I'm surprised that none of the recently-promoted PL clubs went after him.

mazhar13 said:
I'm surprised that none of the recently-promoted PL clubs went after him
Click to expand...

Agreed! A solid player in the Championship. 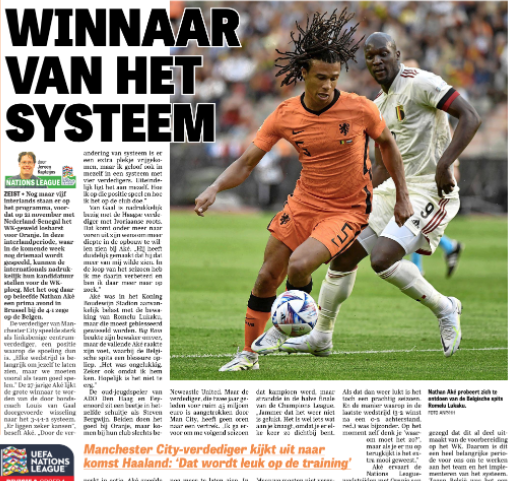 Aké on his future:

I am going to show myself even more next season. In principle, I just want to continue at City.
Click to expand...

I don't have the requisite privileges to post in the discussion thread, but I must say it seems slightly crackers to have 4 different threads and places for debate for what is essentially one dimension of football. It's incredibly diffused and complicates what ought to be simple chatter over transfer gossip. Also, while it might work over the summer months during the postseason break, will all four threads have much activity when the football kicks off again? Seems like a rather convoluted and roundabout way to solve the original problem (which I'm not even sure has been solved?).

On topic: like @mazhar13, really surprised that Forest didn't go for Isaac Hayden. They are going to desperately need some players with a bit of experience if they are to stay up.

Why is there an exception for Wrexham?

Went to the wrong team in Manchester, would be ideal in a Ten Hag side

I want to play in the Premier League one day. When I was young, I saw Arjen Robben play at Chelsea in a scary team. Then I thought: I want that too! I also have a shirt of him. Chelsea was just my club, man. Just like Feyenoord from an early age.
Click to expand...

On whether he'd want to move to the PL this summer:

Certainly. I just haven’t had the chance to go to such a dream club yet. They have never called. My agent also knows that I am a fan of the Premier League. But Feyenoord is still my dream club.
Click to expand...

sewey89 said:
Fair. I would like all National League to be included tbh, as I follow Chesterfield and I don’t have anywhere to go to, to follow the other transfers in that league, but I understand that a line needs to be drawn somewhere
Click to expand...

What's your opinion on what happened with James Rowe? He did well but from the little i read he seems a bit of a prick but you got Paul Cook back which is quite a coup.

Tielemans on his future:

You need to stay calm. I’m good where I am. I still have a year left on my contract. I’m not in a rush. When you change clubs, you don’t change just to change. You change because there is a great project on the table. For a player, the most important thing is to play. It’ll be up to me to make the right decision regarding my future this summer, but now, I’m relaxed and focusing on the Red Devils.
Click to expand...

CraftySoAndSo said:
What's your opinion on what happened with James Rowe? He did well but from the little i read he seems a bit of a prick but you got Paul Cook back which is quite a coup.
Click to expand...

The guy is an absolute cnut. Lots of stories have come out about him from staff who worked there and he was just rude, obnoxious and many other things that I’ll not put on a public forum.

The buzz around Cook coming back was great, but the performances since he came back haven’t been up to scratch. A lot of that is down to Rowe having players to suit his style (3 at the back and relying on Tshimanga) and then Cook trying to implement a fast paced 4231 and Tshimanga getting injured for the season in his first game..

All in all a season that offered a lot ended in a bit of a whimper, but there is a lot of optimism about Cook building his own team in the summer

Location
The Arena of the Unwell

Always confuses me when those pesky Belgians call their national team the red devils.

Inter-Lukaku, the negotiations can begin. After initial contacts Chelsea did not close to the possibility of selling him on loan. Now, however, it is necessary for Inter to make a step towards the Blues with the right formula. The operation that seemed impossible is now real.
Click to expand...

On a side note, Romano has basically become Di Marzio's sole translator now.

He’s so gonna run his contract down too

Marcos Alonso on a possible future in Spain:

"I have one more year on my contract. I have already said that I would like to, but in the end it doesn't depend entirely on me."

"It is clear that the desire to one day play in Spain is there."
Click to expand...

I think its better this way because it will prevent people from engaging on arguments or blocking each other just because they are not interested on some specific content. We'll get used to the new format.

I agree. Even if it's being split up, 4 different threads is too many. 2 is fine.

Where have you been mate? You have "risen from the ashes like a phoenix" I suppose.
Welcome back, hope you stick around.


On whether he'd want to move to the PL this summer:
Click to expand...

Lutsharel has a lot of dreams going on there.

Keep discussion on track. There is a tweets debate thread in the General

A tad high on the wages (thankfully Deph, Gylfi etc. leaving is freeing up c. 300kish in wages per week) but a good signing. He will bring consistency and calmness to a calamitous defence.

So much for it being a smooth process like Thiago then.

Why don't they just add a clause for him to solve world hunger?

Getting a top CB in return is a dream scenario from this mess. If we can snag Skriniar or Bastoni in return while off-loading Lukaku in the same deal, we'll come out this smelling of roses. That would be incredible.

it was the same song and dance with thiago.
X
Threadmarks
You must log in or register to reply here.