ever get that feeling of déjà vu?

Location
Currently on trial for plagiarism

You need a lot of luck for things to go your way in football..Liverpool in 2005, with the goal that never was and the Milan players celebrating at half time with their "2005 CL winners" t shirts...Or United in 2008 with a penalty shootout or Munich in 99, when they got arrogant and cocky (And no, despite what the Class of 92 DVD says, Nicky Butt was NOT incredible that night) or Blackburn the day Andy Cole shit himself and bottled chance after chance!

Luck plays it's part and Vincenzo here is not taking that into account here and is basing this purely on their current form. Not going to last and they weren't spectacular the last number of years since the take over. They were handed the fecking league and that, IMO, will always be the biggest smear on Fergie's legacy sadly

Big words, from a small time club. Not the first time they've done it.

Location
Where the goals come from.

Jiggs'Hamstring said:
I'm intrigued to know where this idea they can win the European Cup comes from. Is it all based on that one game at Bayern?
Click to expand...

No, it's not based on anything as far as I can see - He's just saying that City's owners won't stop throwing money at the issue until they start winning everything.

It's a statement that may as well have been made on 31st August 2008 - I guess the only thing that changed since then is that they have undeniably improved, as expected, over those 5 years, and if you extrapolate that improvement (which may or may not be a legitimate thing to do), then in another few years they will be winning one hell of a lot of trophies.

I'm still holding on to the hope that either a) it becomes apparent that you can't buy everything and the Sheikhs feck off or b) they do win everything and then get bored and feck off. I know when I've played computer games in which you can eventually get to a point where you completed all the missions, and you can beat everybody as you have so much stuff, I tend to stop playing in favour of something new and interesting.

Sparky_Hughes said:
Not a chance, one trophy is the most they will get
Click to expand...


Really? I think they're very likely to win the League Cup and the league.

Jiggs'Hamstring said:
I'm intrigued to know where this idea they can win the European Cup comes from. Is it all based on that one game at Bayern?
Click to expand...

Because they have nothing to fear from Barca, so says the majority of pundits.

I'm looking forward to Messi dicking all over them in both legs.

Have you ever been in love before?

Sir A1ex said:
I don't know, maybe I'm too negative about things. But I do think there's potential for City to keep on pushing the concept of buying trophies to levels well beyond what Chelsea or Madrid have ever done.
Click to expand...


How much further can it be pushed? Madrid bought Di Stéfano, Kopa and Puskás - each one recognised as one of the best players in their continent - and consequently won 5 European Cups and 3 league titles in 5 years.

They can afford to buy every player on the planet if they wanted. They probably will win a quadruple at some point.

Goooose said:
They can afford to buy every player on the planet if they wanted. They probably will win a quadruple at some point.
Click to expand...

They can afford every player, but they can't always attract them.

Loon said:
They can afford every player, but they can't always attract them.
Click to expand...


Money is the attraction.

I miss the season when they were in League One while we were winning a treble.

Goooose said:
Money is the attraction.
Click to expand...

Not always. Remember Isco turned down City in the summer.

Loon said:
Not always. Remember Isco turned down City in the summer.
Click to expand...

I'm sure Madrid matched whatever City was offering, if not more.

No matter what they do or spend, they'll always be shitty tin-pot city to me.

The funniest thing is the reaction of the fans, the good old 'citizens' of Manchester who said "United buy the league" over and over again. Then bam, they win the lottery and change their tune completely. Shit house institution, who will never ever have the class, history or respect of a Manchester United.

I'm trying to think of one redeeming feature of City and there isn't one - consider for a moment the owners, men who have made money in one of the dodgiest ways, haven't heard of human rights and represent a country built on modern day slavery coming from poor parts of the far east. These men are using City for their own ends, they don't care one jot about the club or it's fans on any deep level aside from using it as a vehicle to manipulate how they and more importantly the institution and country they represent to the west. They aren't trophy hunters in the sense of Chelea's Oil wanker, they're hunting trophies to garner positive press for their influence in this country and further afield. The fans, fickle as all football fans are, have accepted this instantly without any regrets and you get the feeling this boils down to one thing - getting one over on United - whatever the cost for them. Doesn't matter.

Football is just unlucky the bastards decided to pick City of all fecking clubs. Couldn't have been Everton or fecking Villa. They had to pick the biggest shitbags in football.

They will win the domestic treble. Even if they beat Barca I still don't think they are good enough to win the CL. Bayern would still have them.

Location
Where the goals come from.

Brwned said:
How much further can it be pushed? Madrid bought Di Stéfano, Kopa and Puskás - each one recognised as one of the best players in their continent - and consequently won 5 European Cups and 3 league titles in 5 years.
Click to expand...

OK, I'm talking about in the last few decades... but the 50s Madrid is probably a fair enough estimate of what City's owners are hoping for.

Mel_F said:
I'm sure Madrid matched whatever City was offering, if not more.
Click to expand...

I doubt City would be outbid on a player they really wanted though. I'm sure he chose Madrid because he wanted to go there.

Has a Sony home cinema

Sixpence said:
They will win the domestic treble. Even if they beat Barca I still don't think they are good enough to win the CL. Bayern would still have them.
Click to expand...

I remember Quieroz talking about United's chance of "winning 7 titles in a season" - he included the Charity Shield, European Supercup and Club World Cup in there - as another reason for Ronaldo (aka CR7) to stay. Of course by the time Ronaldo got back from injury we'd already lost one of those cups.

So the big 4 trophies for City, maybe not this year but some year? It's not impossible - Barcelona have done 6 cups in a calendar year. Inter have won a treble. You'd have got great betting odds for either of those results. I don't see City getting past Barca, but Pellegrini might surprise me. Based on nothing I think Chelsea will beat them in the FA Cup.

But next year, or the year after? They're going to compete for the top young talent - if they pick up the next Messi or Ronaldo, they're going to be scary. On the other hand they're a rich man's toy and he may find a new plaything, or madness may take over and player/manager continuity may get discarded in favour of the next shiny object and it'll all fall apart.

This feels a bit like the time a certain Chelsea official claimed they would dominate for a 100 years after winning two leagues in a row. They have since won only a single title out of 7.

For all their lovely attacking play they could end up with only the league cup.

I doubt they'll turn it around against Barca and I'd make Chelsea favorites for the league.

Chin up, Vincent, you massive cockhead.

Location
I have no idea either, yet.

I think it ended excellently.

Location
The CL is a glorified FA Cup set to music

Imagine how he must feel sitting on the bench watching Lescott and Demichelis play.

Anyone who's arrogant enough to expect a quadruple deserves to fall flat on their face as hard as possible.

connoisseur of pot noodles and sandwiches

moses said:
I think it ended excellently.
Click to expand...

It'll happen sooner or later. They'll win one before we do.

BEST TEAM IN THE WORLD™

Sherwood: best team on the planet

It's amazing how many people the City PR machine wrapped into their myth. Over 50% on here too. Not me obviously.

Kompany probably visited the same electronics store as Essien. Got his sums all wrong.

Ronnie O'Sullivan said:
Kompany probably visited the same electronics store as Essien. Got his sums all wrong.
Click to expand...

He'll be pushing a zimmer frame long before those blue bastards get anywhere near a league and cup double let alone the quadruple.

This time next season we'll win the Quadruple, Rodders. 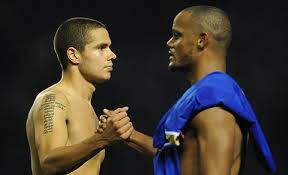