Music 1001 Albums You Must Hear Before You Die

Location
In an elephant sanctuary

dumbo said:
I don't have copies of Britney and Christina laying about.
Click to expand...

Yes yes we know you are more of a Taylor Swift guy.

dumbo said:
33. Britney - Baby One More Time
How did this turn out to be good? I expected to endure it once then bin it, but ended up enjoying it. It really picked up my mood. Some of those Lauperesque inflections in her vocals are sort of gorgeous. A couple of filler tracks but everything else is a brightly produced pop banger. Not what I expected.
Click to expand...

... although it would seem like your Britneyfication has begun.

dumbo said:
46. Cream - Disraeli Gears
I can take or leave Eric Clapton but as a band they definitely have a feisty chemistry.

47. Leonard Cohen - You Want It Darker
A comforting final record. You can almost hear the twinkle in his eye. Similar to Bowie's Black Star in its reconciling life with the beyond. I wonder if the Johnny Cash American recordings were the progenitor of the death confronting album.
Click to expand...

Absolutely love Disraeli Gears which I discovered quite late (like a couple of years ago), can listen to it over and over.

As for the Cohen one - have you listened to Rough and Rowdy Ways, Dylan's latest album? Falls into that category somewhat too I think.

Oh is he dying now too? The only release I've heard from him in the last 10 years or so was that Christmas jam, pretty good.

Not particularly a Cream fan but the Ginger Baker doc from a few years ago is excellent, and probably more so if you're into them.

And get out of my thread.

Location
In an elephant sanctuary

dumbo said:
Oh is he dying now too? The only release I've heard from him in the last 10 years or so was that Christmas jam, pretty good.

Not particularly a Cream fan but the Ginger Baker doc from a few years ago is excellent, and probably more so if you're into them.

And get out of my thread.
Click to expand...

Well I hope not, but I'm not sure he'll record many other albums (or any at all), and there are a few songs on there that relate to his mortality. It's also a very nice album all around.

51. Nina Simone - Wild Is The Wind
All gold moody Nina. Song for song it's her best collection.

53. Patti Smith - Horses
Certified dumbo Top 5 Album
My favourite rock - of any hue - album. Wild, theatrical, dirty soul tearing stuff. I bought a collection of Rimbaud poetry off the back of this album, and never finished it. Keep your Ramones, Your Doors and Stones, just give me Patti Smith. Favourite track: Horses - no not the song, the whole fecking thing.
.
54. Talking Heads - 77
Byrne at his most gawky. It's not the album I'd reach for, and a number of the tracks are quite samey but it has some real high points too. I prefer the live version and the acoustic version of Psycho Killer to the one on this album. I do like how Don't Worry About the Government is apparently entirely sincere, despite it sounding like a cutting indictment of modern convenience. Favourite track: Book I read, early Remain in Light vibes.

55. Fleetwood Mac - Rumours
Dads of dad rock. Stevie Nicks gives them their credibility. She cuts a jagged scar through the otherwise middle of the road bullshitery. Favourite track: Stevie Nicks.

56. Michael Jackson - Off the Wall
Jackson with the full soul-funk genre trappings. In terms of notes played this is his best piece of music but it doesn't have that wacko operatic genius him and Quincy create on Thriller.

57. Iron Maiden - Iron Maiden
I'm not a big metal fan, due to a lack of study rather than an inherent dislike. Iron Maiden and GnR would be the bands I'm most familiar with. It was a fun listen and I really like Phantom of the Opera. Beast is the album I know much more of.

58. Yeah Yeah Yeahs - It's Blitz
Listenable but fairly unmemorable effort. Fever to Tell seems the more natural fit on the list. I prefer the Karen O solo stuff from around the same time.

59. Cat Stevens - Tea For The Tillerman
Compassionate, gentle, beauty. He must be a total monster. I played the original but Yusuf Islam rerecorded the album recently and it sound amazing again.

Hmm, seems we have very similar musical tastes. Both Horses and Blue would be in, or close to, my top 5 (sometimes Hejira instead of Blue).

BD said:
Hmm, seems we have very similar musical tastes. Both Horses and Blue would be in, or close to, my top 5 (sometimes Hejira instead of Blue).
Click to expand...

Interesting. Clouds and Ladies make up the Holy Trinity for me. I don't feel quite the same way about later Joni, (or Seagull). Court, Hissing and Hejira are loaded for tomorrow though so we'll see how things go.

61. 62. 63. Joni Mitchell - Court and Spark/ The Hissing of Summer Lawns/Hejira
The way her style evolved, with a focus on grander production, left me behind somewhat. I find the jazzy shift on Court and Spark quite alienating but Summer Lawns and particularly Hejira have good things to offer, if only I made more of an effort. I might do.

64. David Bowie - Blackstar
Poignant and atmospheric farewell. It contains some of the best late Bowie material.

66. Curtis Mayfield - Superfly
Probably the best soundtrack album. It's funny to think that this high class production is hitched to such low brow, trash cinema - albeit one of the better examples of the exploitation genre. It's a testament to it's quality that it works both as an accompaniment to the film and as a stand alone piece of original music.

67. Alanis Morissette - Jagged Little Pill
The writing is ambitious and occasionally falters, but it's got good melodies and hooks. I think it holds up a fine pop-rock record.

68. The Prodigy - The Fat Of The Land
Yep it's great. A thumping dance opera.

Oh you thought it was over?

69. 70. Stevie Wonder - Songs in the Key of Life/Innervisions
Key of life has 6 or 7 great songs, though I find it a little saccharin in places for my palette. It's a real slog to get through in a single sitting too; I need it crunched into a single LP. Innervisions is the perfect cut of sweet sounds and gritty slice of life realism, and at a perfect length.

71. 72. 73. PJ Harvey - Dry/Rid of Me/Stories From the City Stories From the Sea
Good/better/best. I like the early grit but love the later music that balances out the harshness with more melodic tones. I originally thought that Let England Shake was the sole PJ Harvey on the list. Its inclusion makes more sense now.

74. The Beach Boys - Surf's up
Nice and all, but I really just want the hits.

75. Medulla
Heaven and Hellish. It contains some beautiful things and some interesting failures, with a couple of bits that are quite ugly. I still think the use of beat boxing was a cheat. This and Utopia lack the accessible pop elements of some of the earlier albums but are perhaps more rewarding experiences.

77. Echo and the Bunnymen
I don't listen to a lot of new wave era music so I was surprised how much I enjoyed this. Very listenable up to and beyond the hits.

78. Curtis Mayfield - There's No Place Like America Today
Had never heard the album before, I loved it. Put it with the keepers.

80. Paul Simon - Graceland
Too tied up in car tape-deck nostalgia for me to make a fair assessment. I think it's amazing musically but if it's not, it brings me great joy regardless.

81. Lauryn Hill - The Miseducation of Lauryn Hill
Great singer, great rapper, too much singing, not enough rapping. She flips words early on so brilliantly that it just makes me want a whole album of that thing. Some of the vocal layering later on is irritating.

82. The Mars Volta - De-Loused in the Comatorium
New to me, certainly has a certain raw energy.

87. Wilco - Yankee Hotel Foxtrot
There's something good about the guitar drum ambience, though a little dreary.

88. David Bowie - The Next Day
Didn't hear it when it came out, played it twice and found it ok. Some decent songs but it's not a Bowie I need in my life.

89. 90. Nick Drake - Pink Moon/Bryter Later
The music has a haunting quality that perhaps owes something to the mythology surrounding Nike Drake. Some very good stuff within the oeuvre though the tone is so solidly sombre throughout that it becomes oppressive. My favourite stuff is on the posthumous Time of No Reply release.

92. 93. Belle & Sebastian - Tigermilk/If You're Feeling Sinister
Likeable, and something I think I would get into if I had the time to do so. Sadly I have a thousand other albums to listen to.

94. Captain Beefheart & His Magic Band - Trout Mask Replica
Hadn't heard this in about 10 years. Certainly not instantly catching. Interesting moments, enough to want to return to it.

97. The Notorious B.I.G - Ready to Die
Slick flow that carries even the more cheesy production

99. Dizzee Rascal - Boy in Da Corner
A brilliant record. I love the sparse production with its harsh industrial beats and fierce rapping style. Shame he dissapeared into pop stardom because this is a wildly creative work, with sophisticated song structures - even if the lyrical content is heavy on bullshit street brovado.

103. King Crimson - In the Court of the Crimson King
Haunted by the album cover peeking out of my mum's record collection* as a babe, haunted by the sounds as a kid. An album that still haunts me now. 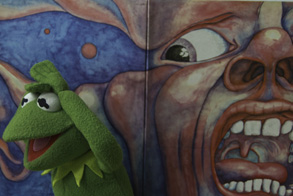 Jaysus you just reminded me of Trout Mask Replica. What a pile of...weirdness that was. I wanted to call it a pile of shite, but it was at least different, so not so shite I guess?

BD said:
Jaysus you just reminded me of Trout Mask Replica. What a pile of...weirdness that was. I wanted to call it a pile of shite, but it was at least different, so not so shite I guess?
Click to expand...

Much of It's very rough but when the instruments stop clashing around for a bit it has some nice ditties. I've played it 3 times (possibly only once straight through) in the last 15 years of owning it though so I can't pretend it's a favourite. Possibly a taste you acquire through many stubborn plays.

dumbo said:
Much of It's very rough but when the instruments stop clashing around for a bit it has some nice ditties. I've played it 3 times (possibly only once straight through) in the last 15 years of owning it though so I can't pretend it's a favourite. Possibly a taste you acquire through many stubborn plays.
Click to expand...

I reckon you're on to something here - I relistened to the first few songs after you reminded me of it, and it was kinda nice to hear it again in, a very weird way. Not nice enough to play the whole thing through, but maybe in a few years when I'm reminded of it again, I might get through it all.
You must log in or register to reply here.