Seems you can't sort the statistics, and that they take days to update from the previous game though..

As so many people have already pointed out (quite rightly it has too be said), this is a GREAT thread & a big congratulation too, Mrs Smoker for all the hard work that she put into this truly great thread!
Last edited by a moderator: Mar 28, 2018

What a great post, such a great thing you guys are so motivated to research these statistics so lovers of the club like myself can just read them and learn more knowledge. Keep up the hard work please.

Have to say that when you think about his wages and what you paid for Solskjaer and how often he just came on as sub. He must have given most value for the money of all the players in the modern era.

Mrs Smoker said:
Hi all. Hope this thread might be of some interest here in this forum, cataloging all the goals and assists from United player since 1987-88 season to today.

I guess lots of stuff can be found on wikipedia or similar sites (http://www.mufcinfo.com/ is awesome in that regard) -- well, not assist stats -- but being in one thread, on our own forum, without the need to go elsewhere, surely cannot be that bad. Will go season by season adding stat tables, and maybe some other stuff, and at the end will post various misc tables.

First full season with Sir Alex Ferguson in charge. United finished second in the league, behind only the formidable Liverpool, who won their 17th title with only two losses. League also saw the relegation of Chelsea, which is always nice. For some reason there have been 21 teams in the Division 1 then, though, reason actually might be simple, slow decrease to 20 which happened in 1988-89 and lasts until today (1986-87 had 22 teams).

Reached Round 5 in both FA and League Cups, losing 1-2 to Arsenal in former, and 0-2 to Oxford in latter. Couple more years of no Europe for all English teams.

Fergie signed three players that season: Viv Anderson, Brian McClair and Steve Bruce. Anderson played more or less regularly in this season, but in next three had just 31 more appearances. McClair's and Bruce's United careers have gone much better. 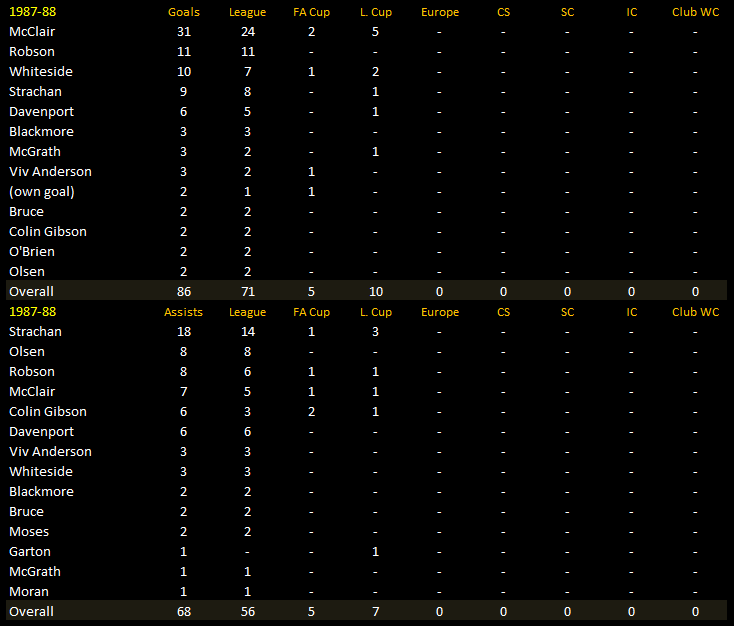 Basically, same as today's fantasy footballs and optas and transfermarkts of the world are doing them. Though, with slight differences.

• shot on goal that was saved, blocked, or hit the woodwork, aka 'rebound'
• final pass or shot that makes the opposing player score an own goal
• foul for a free kick or penalty from which the goal is scored (directly from free kick)

• final pass to a goal scorer

This is where I slightly differ from others, and with what I think is a bit fairer (or what I just like to believe).

1) After the pass, the scorer has to have three ball touches at most before shooting -- it's a bit arbitrary number, yeah, but feel it's still much better than nonsense such as Fabregas' "assist" (second video, at around 5:25) to Hazard in Chelsea's game vs Leicester or last season's Rooney's "assist" to RVP in a 4-1 win over Swansea. Feels just silly to brand those as assists, yet, they have been by...some weirdos.

2) If the pass is deflected, often from crosses for example, and the trajectory of the ball is altered by more than 45 degrees, the assist is not given. Less, assist given. 45 ain't bad, right?

Nothing official of course, just my take on that.

Used a lot of season reviews dvds and youtube videos, and Fergie's 2000 goals anthology. It was worth it, as I saw some absolutely brilliant goals, brilliant plays, brilliant passes. In these 27 seasons I did, some situations weren't clear after watching the vidoes, Caftards helped with some, old match reports from BBC, Guardian, Indy, and others helped with others, but still eight situations remained unclear. Think that's not bad, eight in 27 seasons. Anyway, if you think you might help, check this post: https://www.redcafe.net/threads/any-experts-on-1992-93-season.394530/page-2#post-16288685 . All that's left. Completist in me would love to have that done.

Sir Alex Ferguson's second Manchester United signing. Already a prolific scorer in Scotland, he immediately showed his skill by scoring 31 goals in his debut season. Wasn't as prolific later, but did have two more 20+ seasons. After United, played a year in Motherwell, then went coaching. Been our academy coach in three instances, and currently is an academy director I believe.

Strachan's assist stats there are kind of unreal. Selling Strachan was perhaps a mistake with the creative end product he produced. Alongside Strachan, Cantona, Batty, Speed and Chapman, see Leeds beat Manchester to the title that season to prolong Man Us drought. I remember I grew up with a Leeds fan who kept going on about Strachan.
Threadmarks
You must log in or register to reply here.