So what's next for Sir Gareth Southgate?

Despite me wanting England to lose, this is not a "let's piss ourselves laughing at England" thread. Plenty of those exist.

He has managed England across two big tournaments. A semi-final and a final placement is a massive step in the right direction. Based by just looking at the placements, you would think he's done pretty good.

But look under the hood and it tells a different story.

The World Cup had England playing in one of the easiest draws I remember. They got beat by the only two good teams they played (Belgium and Croatia).

This tournament (Euro 20) lined up perfectly for Southgate yet again. Here, they beat a big nation in Germany but Southgate didn't utilize what many believe is one of the best attacking squads in the tournament and got completely schooled in the final.

So in two tournaments, Southgate's England have a pretty bad record in the games that are not against teams that they should be brushing aside.

Would you reward him for the SF and Final placements with another tournament? Or does he get the boot and someone new comes in?

I want him sacked. I think England came this far despite him, not because of him.

Location
I'm better than Messi (even though I'm not)

The F.A. still want to give him an extended contract, he is definitely still here for the next World Cup. They want him for the next Euros as well.

He needs another 6 years

Sack him and go out in group stages.

The best manager they have in ages, bringing them into a semi and a final in a row (even though UEFA helped them a lot) and all they want is to sack him. Perfectly fits the english fans.hahaha

Bang average manager who should be managing Crystal Palace or Brighton, not the national team. Get rid.

I think he should resign.

It's a pretty clear and obvious progression that England will win the world cup next year.

He will stay and get you another semi final, most probably playing a little bit less dire football and trying to be more proactive and attacking, but I think he’s not the man to utilize this great group of players and win anything. My money is on England losing QF/SF in Qatar

The hilarious thing is he's still England's second most successful manager, so he'll be rewarded with a new contract, only to ceremoniously be knocked out at the WC in either the group stages or R16, cue the sack when England finally realise he's a bit of nothing manager. He'll then end up managing some mid table side in the league which is very much his level.

I can't speak too much because I'm not English and I'm not drunk.
But really though, is it normal to play with 6-7 defensive minded players on the pitch when you have this many talents up front?
(Jordan Henderson is shite, ignore him) 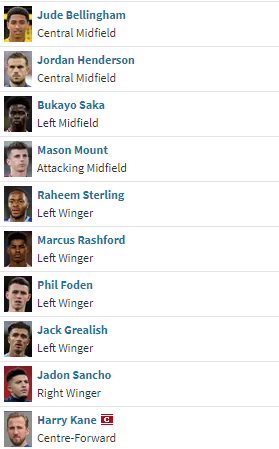 Hopefully he stays for as long as it takes to absolute piss away this squad he's got.


They are where they are not because of him. Serious squad there and he totally hasn't used the talents he has

Despite getting to the final (and semi in WC) they are very negative. Basically set up not to concede and to win one nil.

They are not really that good and under achieving for the players they actually have. How Sancho is not starting is beyond me.

Lucky as well with the draws.

duffer said:
Semis in the World Cup in 18
Losing finalists in Euro 20

It's a pretty clear and obvious progression that England will win the world cup next year.
Click to expand...

Only as long as they have the same quality of opponents as the likes of Macedonia. They should make the final again.

The 'England Expects' brigade will reappear next year, we will go out in the quarters and he gets the sack the day after.

He will be knighted and remain the manager of England for 16 more years.

He'll get a free ride for the next 2 tournaments if he wants to stay on as manager. Even if we go out embarassingly early.

I dont think he'll get us to a final again. Then again another manager might not either

There's no way the FA will get rid of him now after taking the team to the final of the Euros. As an Irishman I can only look on in envy at the sheer depth of talent that Southgate has at his disposal, maybe it will lead to him tweaking things and not being so defensive, who knows?
Personally I think his situation is very similar to Ole at United. He is getting largely positive results with a squad of players most managers would go crazy for but is it enough if you don't win anything?

Hugh Jass said:
Despite getting to the final (and semi in WC) they are very negative. Basically set up not to concede and to win one nil.

They are not really that good and under achieving for the players they actually have. How Sancho is not starting is beyond me.

Lucky as well with the draws.
Click to expand...

Didn't have a problem with the starting lineup. We took and early lead, but did not build on it when we had the upper hand. Then when they equalised we made changes to hang on rather than retake the upper hand.

He reminds me of Joachim Low in some ways.

Low was a nearly man until 2014 and then it went tits up after that.

Has Southgate peaked or is still more to come? Tactically and game-management wise he looks mediocre but has some amazing talents that can cover up his shortcomings.

The problem is, international management is now considered B tier and successful managers would be reluctant to go into it so finding someone great would be difficult and you could be left with the likes Pardew, Bruce or Moyes in charge.

edit: I should add Low played much better football at times, Germany were great to watch up until 2014. Southgate doesn't play the same level of exciting football.

VorZakone said:
I want him sacked. I think England came this far despite him, not because of him.
Click to expand...

He will definitely get the next World Cup... after that who knows.

I'm not sure he'll make a particularly good club manager after this international experience.

Ekeke said:
He'll get a free ride for the next 2 tournaments if he wants to stay on as manager. Even if we go out embarassingly early.

I dont think he'll get us to a final again. Then again another manager might not either
Click to expand...

It's an awkward one isn't it. Unless he starts to show some courage I agree, I cannot see us winning anything despite the talent of the players at his disposal. However I cannot come up with somebody who will do better either.

Torture him by making him watch clips of managers making subs.

The one reason I was so sure England would lose despite all their luck and cheating was I just knew Southgate would eventually mess it up.

Ooooooh we are overlooking the obvious. He becomes the manager of Man Utd when all the Ole Out people get what they want.

lsd said:
The fact some England fans on here as well were preparing him as a possible United manager was just so predictably hilarious
Click to expand...

Seriously? Some want him as a United manager? Get the feck out of here!

He's not got what it takes to win unfortunately.

He is a mentally scarred and scared manager. Twice his teams have been leading and he's failed to seize the moment.

Any manager worth their weight would have seen that period between 45-70 minutes and done something about it, instead he waited and waited until Italy inevitably scored.

Infuriatingly as soon as they scored he changed the team + formation and we got back into an even footing.

He would be delighted if we snuck through each match 1-0, and with all the attacking talent we have right now it's just not enough.

I think his time as manager is done but would do well to stay within the FA somewhere.

An excellent man-manager. A poor tactician.

Swap Mancini and Southgate last night and England win at a canter.

After slating him in the groups for playing boring boring football I was preparing to eat my words; we did play more progressive football through the knockouts and really should've beaten Denmark too in 90 minutes.

Now I'm back to slating him and wanting him gone. Unforgivable sub and tactical choices after such a bonus start.

Think anyone wanting rid of him is mental to be honest. Semi finals of a World Cup & final of the Euros in the space of 3 years, with a young and improving squad? Why would you rip that up and start again? We'd only been to 3 semi finals in 50 years prior to that and one of them was a four team tournament ffs.

Do people just forget we went down the "top manager" route with Sven & Capello when we had one of the most talented teams in world football and never got past a quarter final?

Swap Mancini and Southgate last night and England win at a canter.
Click to expand...

His treatment of Greenwood, and his shocking approach to the penalties yesterday says otherwise.

what would Souness do?

We played a major final in our own stadium and decided to defend a 1 nil lead for the entire game. He's only got himself to blame nobody else. That was our chance. This was our moment and he blew it because he fears the opposition more than he trusts his own team. And his negative tactics didn't even work either did they? We basically clung on for dear life and got to penalties where we all know we have a terrible record anyway.

We started the game on fire and went 1 nil up. We should have carried on going at that aging Italian defence at least until the 60 to 70th minute.

He won't get sacked obviously and nor should he given that we never get to finals. However I have zero confidence in him changing his ways. We will go to Qatar and do more of the same. Pragmatic football.

IrishRedDevil said:
Torture him by making him watch clips of managers making subs.
Click to expand...

You could make him watch the final again and again then. He should see Mancini make subs and seize the game while he sits twiddling his thumbs with that wealth of attacking talent on the bench and 8 (9?) defensive players on the pitch. Make him rewatch it till his brain is empty of all other emotion but despair.

Swap Mancini and Southgate last night and England win at a canter.
Click to expand...

This i totally agree with.
You must log in or register to reply here.