Worst players we’ve been linked with

What was that kid we were gonna sign when we signed Tosic? We were going to sign him the season after and he was supposed to be a superstar. I remember his manager punching him where he was playing.

Thomas Meunier looked like a semi-professional for Dortmund this season.

wolvored said:
What was that kid we were gonna sign when we signed Tosic? We were going to sign him the season after and he was supposed to be a superstar. I remember his manager punching him where he was playing.
Click to expand...

Adem Ljajić. He predictably ended up with Beşiktaş.

Some awful Goalkeeper links over the years.

Lay said:
The Longstaff rumours are the top for me. Such an average player who probably doesn’t even play for Newcastle anymore. Think he was wanted by Udinese recently
Click to expand...

It was at the height of the “buy British” summer when Ole first arrived. Unsustainable strategy given how inflated the prices are, thankfully it was ended not long after it started. Obviously hindsight is 20/20 & Longstaff can’t get a game for Newcastle & is more likely to move for £5m than £50m now, but even at the time it was a baffling one. He had only played about 10 games & had a serious injury. I remember reading we were prepared to pay £30m but Newcastle insisted on £50m, so I guess we owe them a thank you. Their greed saved us from making a poor signing.

Weren't we linked to Ganso?

Oranges038 said:
Brian Deane and David Hirst too were rumoured/linked, not bad players at the time.

So this thread is only about players we were linked to but did nót actually sign? Cause we brought in and paid money for worse players than in the list right now..

sincher said:
Dion Dublin did very well in his spell at United.

I remember us being very close to signing Marcos Senna, who was a good player but tbh faded a fair bit not long after the move fell through.
Click to expand...

Celio Silva is a great shout, didn’t we actually sign him but couldn’t get the work permit & end up with Ronny Johnsen instead?

Marcos Senna was an excellent player.

GueRed said:
Celio Silva - Summer 1997. Deal was signed and sealed!...Work permit was denied however so it fell through. The Brazilian centre-half never amounted to much post 97.

Roberto Rios - Early 1997 we were heavily linked to him. Fergie even went out a couple of times to watch him play for Betis. Strong solid Spanish centre-half but spent the rest of his career injured and was forced to retire at 30yrs old.

Vampeta - Remember being linked to this Brazilian international wide player constantly in the late 90's. Dodged a bullet. He ended up a journeyman.
Click to expand...

Good shouts. Added to list. Just remembered Kevin Hoffland too, Dutch CB from a couple of years after that time.

The link to Bakayoko and overall overrating used to upset me.

Deane was decent at the time. Hurst I think became injury ridden after injuring his foot kicking a camera for an advert.
Click to expand...

That shouldn't be funny but it is.

JPRouve said:
The link to Bakayoko and overall overrating used to upset me.
Click to expand...

Forgot about him. The Mourinho era really was a dark period for transfer links. We were heavily linked with Dier & Arnautovic around the same time.

Some thought he was talented. But I guess in the end he couldnt find a Seal of approval at a decent club

Were we linked with Lee Bowyer in the early 2000s or did I just imagine that?

Wasn’t right for us but can’t put him on a “worst player” list. Was still a very good player after being linked with us, won a champions league & got to a World Cup final

‘Our pitch was terrible. That’s why I tried to sign Mick Harford. To try and play football on that pitch was impossible and I thought if I got Mick, we could have just played it up there and let Mick whack the centre-halves out of the road. That was a mistake. We should have signed him.’

More sheds (and tiles) than you, probably

Ekeke said:
Some thought he was talented. But I guess in the end he couldnt find a Seal of approval at a decent club
Click to expand...

Just needed the right manager to make him feel loved. A kiss from a Rose for example would have been music to his ears.

Remember we once were linked with Carlton fecking Cole.

Giggs' right foot said:
Remember we once were linked with Carlton fecking Cole.
Click to expand...

I don’t remember it but Jesus Christ..

“Identified as a replacement for Ronaldo & Tevez”

Were we linked to him? Yikes!

Was Santa Cruz linked to us? Or only City.

SoCross said:
Were we linked to him? Yikes!

Was Santa Cruz linked to us? Or only City.
Click to expand...

The fact that Newcastle had the gall to ask for 50 fecking million for Longstaff still blows my mind.

Longstaff is the one that immediately comes to mind, already mentioned obviously. I'd hope that was just paper nonsense, or maybe some noise from his side. Surely nobody at the club was taking a real look at him?

Matt Ritchie, when he was at Bournemouth. That was also an odd one. We seemed to be linked with a few of their players. Josh King on more than one occasion, and Brooks.

Also Jasper Cillissen. Perhaps a bit harsh as he's a decent keeper, but an enormous downgrade on De Gea at the time.

And the lad that Liverpool signed who is now at Southampton. Minamino(sp?) though that news came out after he signed for Liverpool, I believe.

Schmeichel's Cartwheel said:
I don’t remember it but Jesus Christ..

"For Ferguson, though, Cole is someone who could play with Wayne Rooney and who offers something different — more of a physical presence — from the forwards he has at Old Trafford."

We had just won the league, played in a CL final and our club wanted to replace Tevez and Ronaldo with the mighty Carlton Cole.

Had to look up Celio Silva... how have I never heard of him. We'd signed him, fell through and ended up with Berg. All a bit before my time really.

Vampeta is a blast from the past.

JPRouve said:
The link to Bakayoko and overall overrating used to upset me.
Click to expand...

I remember in summer 2016, when Mourinho had just arrived in United and Pep Guardiola arrived in City, we were heavily linked with Breel Embolo. People hyped him up to fit the story of City's Leroy Sane (Elegant, quick) vs United's Embolo (Powerful, pacy). There were even speculations that Embolo would play on the wing first to develop, before Mourinho ultimately moves him to centre and transforms him into the new Drogba.

Then one morning I saw the press running that story of "Schalke 04 has beaten Manchester United for Embolo's signature". I shudder thinking back of those times.

Valencia Shin Crosses said:
The fact that Newcastle had the gall to ask for 50 fecking million for Longstaff still blows my mind.
Click to expand...

Thank God they did though! If they asked for 30 he’d be sitting in our reserves on 100k a week right now.

Decent players:
Arnautovic - not a bad player talent wise but come on.
Moussa Dembele - as a forward if you can believe it. Again, same deal as Arnautovic. If Spurs could be summed up by one player, it's him. I know the caf rates him though.
Steven Defour at one point.
Fabio Coentrao.

Trying to think of ones that haven't been mentioned much.

We're probably still being linked with Gaitan to this day

FrankDrebin said:
That shouldn't be funny but it is.

a key moment in our recent history. We wouldn’t have signed Eric if Dion didn’t get that injury.


pocco said:
Had to look up Celio Silva... how have I never heard of him. We'd signed him, fell through and ended up with Berg. All a bit before my time really.

Vampeta is a blast from the past.
Click to expand...

Celio Silva. Work permit problems. I went to a pre-season friendly against Inter Milan and Silva was on the front of the programme. £3.5m I think.

not heard of him since!

edit. Looked him up on wiki. Not much detail, but he barely played after the deal fell through. Looks like we dodged an expensive bullet.

Adcuth said:
We're probably still being linked with Gaitan to this day
Click to expand... 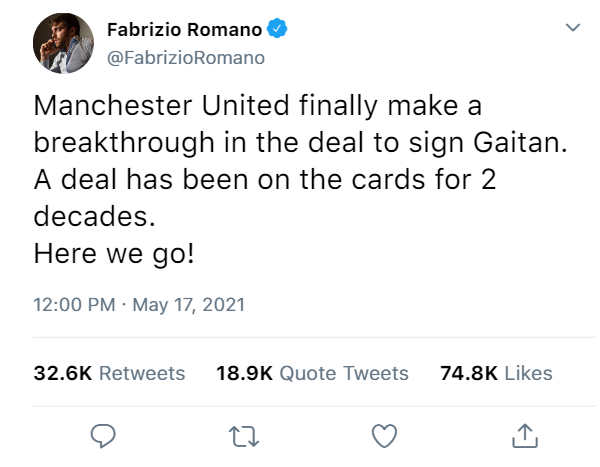 Ron Vlaar was miles better than Alexander Buttner, whom you actually signed.

When was Clasie linked to Utd?

According to the Telegraph Jasper Cillessen was being lined up as De Gea's replacement in 2015. Decent keeper but obviously a huge downgrade from De Gea.

Wilson Palacios. Felt like we couldn’t shake him for about 3 summers running.

When was Clasie linked to Utd?

https://bleacherreport.com/articles...r-news-jordy-clasie-tipped-to-head-dutch-raid
You must log in or register to reply here.