Nick7 said:
Looked incredibly confident on and off the ball.
Click to expand...

It's the hair. Like a footballer punk rocker that doesn't give a feck

Zoo said:
He helped settled us down a bit with his simple use of the ball, control in our play is something we’ve missed badly post-Carrick. He should have taken out the Norwich player outside the box on their goal but that’s down to experience.
Click to expand...

I thought that, just take the booking with a little ankle tap

His ability to pass through the line is brilliant. He also seems adept at playing first time passes, rather than arsing about for an extra 5 touches.

I know it's too much to hope for this season, but this kid could become very good for us.

There’s a swagger about him which I love. You could see it at youth level and it was always just a case of whether he could transfer that to first team football. He’s got a lot of what we are missing, hope he gets time to bed in and fulfil his potential.

Looked a lot more confident today compared to when he started. Good man management by Ole to give him a few minutes.

Zoo said:
He helped settled us down a bit with his simple use of the ball, control in our play is something we’ve missed badly post-Carrick. He should have taken out the Norwich player outside the box on their goal but that’s down to experience.
Click to expand...

Agree. I did mention it when I bumped the thread, but thats just in the interests of being honest and consistent and I'd do that with other players too.

At 18 years old its not a big deal to put in a challenge thats a bit weak. McTominay and Maguire are the ones who need to be doing better

Looks a real footballer. Definitely liked what I saw, looks very smooth on the ball and seems to have some awareness of things happening around him.

Very impressed with him today when he came on, I thought he looked very confident on the ball for a young lad.

That's the type of game you should be giving these lads a crack, far too many times we've been asking them to make a difference this season when in reality they should be drip-fed football at this stage of their careers.

A really useful cameo for him today after a slightly shaky outing during the week. Determined to get on the ball and his teammates eager to give it to him. Looked very competent today, took up all the right positions and made all the right decisions. Fair play.

maybe over optimistic, but I follow both United and Ajax. James reminds me a lot of Frankie de Jong

Any match compilation would be appreciated if anyone sees one.

It was a joy to see Garner,McTominey,Rashford,Pereira and Lingard taking part in the game and having played 5 homegrown players today with Williams on the bench. There are not many clubs that produce young players like we do. The signings in the summer Maguire,Bissaka and James are doing well and proving to be good signings. I want to see how we look after 2 more windows with OGS.
Garner is a very impressive player and is it not better to play them instead of sending them out on loan given how poor the so called "senior" midfield players are?

Location
The Land of Do-What-You-Will

Several good passing initiatives. Still raw defensively, as exposed in the goal. But he has time.

Still ill said:
A really useful cameo for him today after a slightly shaky outing during the week. Determined to get on the ball and his teammates eager to give it to him. Looked very competent today, took up all the right positions and made all the right decisions. Fair play.
Click to expand...

I couldn't believe my eyes, someone moving to receive the ball in space.

Showed for it regularly and wanted to be involved. Good on him.

golden_blunder said:
Loved the little turn/dummy he sold in the middle of the park
Click to expand...

Somebody please clip that

today was more of what I expected from him than the midweek game. I think in the midweek he didn't seem composed mostly due to the awful state of the pitch and I suppose nervousness as well. Today he was really composed, sharp one-touch and through the line passing but obviously slightly weak in tackles and physical battles given that he's just 18 and it's a huge leap physically from the reserves to the PL.

Born a freak always a freak.

Location
Somewhere in your mind, touching a nerve

I really liked what I saw from this cameo. Constantly wanting the ball, good touches, nice passes, and that little turn

He's still a bit raw for me and you can tell he's still getting used to the game at this level, but it's still a nice cameo.

Milo2035 said:
Somebody please clip that
Click to expand...

He’s starting to look like himself at senior level. That’s a huge compliment.

His performane today is only a confirmation of his known quality. And should also be a reminder to those who always rush here to criticise the kids after a poor outing, while suggesting we continue to persist with deadwoods because the kids are overated. Last week he was poor, but he was playing in a crap team/setting. And even at that I picked out two to three forward passed from him which the likes of Mata and Lingard would shy away from. Play the kids right and in their natural position and you'll see why some believe we have something resembling the class of 92 in Garner, Greenwood, Gomes, Levitt, Williams, Laird and I would add, the seemingly "forgotten" Barlow. Ole sticking Gomes to the wings is outrageous, especially when done to accommodate Mata and in a very bad team.

Now I am not saying that they should be starters or that a match day team should be flooded with them. Just make as much use of them as possible. There is no other option after we failed to bring in 2 to 3 other players in the summer. After going 4:0 up against Chelsea, two of them should have had at least 10 mins of play. Hopefully Ole understands now
Last edited by a moderator: Oct 28, 2019

His legs are shorter than his upper body, reminiscent of that ginger lad who once dominated United midfield...

Even if he doesn't become a top quality player, I think he can become at least a valuable squad player.

This is one less expensive squad depth player we have to dig on the market just to cover our squad.
It's a win-win: we get a reliable player and with a bit of luck and hard work he might become something more.

Funny that, almost like a player might struggle a bit making their debut in a European match in Belgrade ffs

What other 18 year old plays a similar role dictating play anyway? can't think of many but Frankie De Jong who's 4 years older.

Loved this cameo I’m kinda purring about his intelligence, passing and movement. He could dictate play for this team for a long time to come and may explain why we were reluctant to purchase a midfielder as Mc Tominay is very good up the pitch and Garner could pull the strings from deep.

Am I the only one who thinks he was to soft on Hernandez's goal? I think he could had prevented it if he tackled him harder.

Maybe. He will learn and at least it didn't cost us three points.

Yeah absolutely but he is 18 and not experienced at this level he will learn, He has natural composure on the ball which is great to see.

He’s going to be a baller. Just needs time but I agree that he can be a partner to Mctominay and have Pogba right play ahead of them in a midfield 3

Born a freak always a freak.

Location
Somewhere in your mind, touching a nerve

Definitely. But he's young and will learn. I actually thought someone should have just hacked Hernandez down. Give away the free kick and regroup. Lindelof and Maguire should have dealt with the situation. 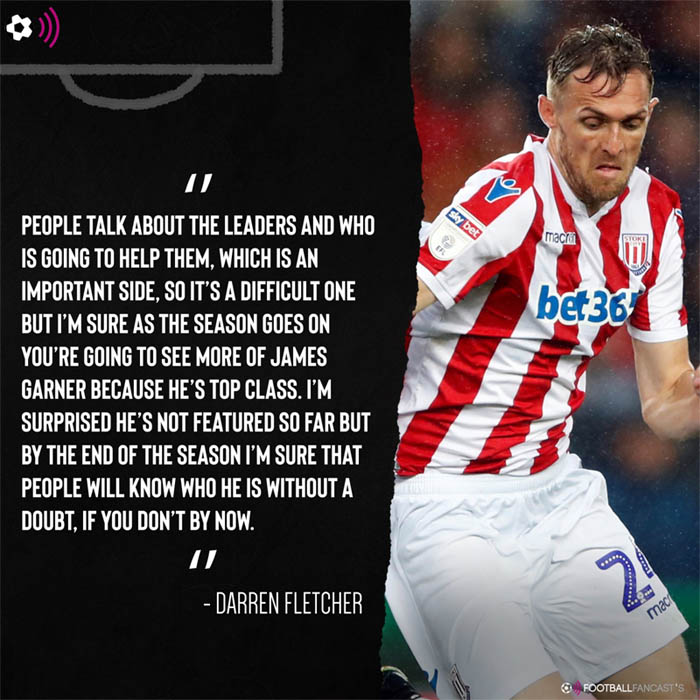 likes playing with swords after fantasies

Great news, Chelsea at Stamford Bridge is a fantastic challenge for him.

Would be happy to see him start.

He reminds me of Veratti. Nimble with his passing. At 18 years old, his midfield intelligence is ridiculous. I would actually like to see him as the base of a midfield 3 like Pirlo at Juve.

For somebody like Fletcher to say that, he's got to be doing very well in training and around the club. That's a great sign.

I think my fellow reserves watchers will also acknowledge Garner has stepped it up this season, he looks ready. Now is a great time to get him into the squads more often with Matic/Pogba injuries.

Petition to get him a haircut.

MyOnlySolskjaer said:
Petition to get him a haircut.
Click to expand...

Sterling Archer said:
It's the hair. Like a footballer punk rocker that doesn't give a feck
Click to expand...

Not punk rocker! Not even close.

More Spandau Ballet.
Threadmarks
You must log in or register to reply here.