Television Anyone recommend me any TV Shows?

A dribbling mess on the sauce

One Night Only said:
From the trailers I recognised a bloke, but couldn't remember where I'd seen him. Netflix's Lost In Space I think it is, that's a decent show aswell. Even the Mrs likes it.
Click to expand...

On Apple TV amongst other places. Very good mini series, 4 episodes in and it's gripping with some major twists coming up.

Really enjoying Marti Scorsese's and Fran Lebowitz's Pretend It's a City on Netflix. 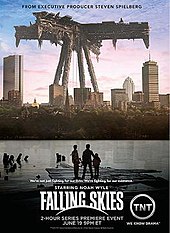 It's a show about aliens invading Earth. But it gets more complex as some of aliens want to work with humans rebelling against the other, a new alien species wants to destroy the one's already here adding to galactic politics and suspense drama.

Set in immediate aftermath of invasion, it has a post-apocalyptic vibe, a really complex and well thought out plot, good mix of action and drama and some very underrated but well done graphics. A very good cast tops the lot!

Schitt's Creek is an easy watch.
You must log in or register to reply here.