youmeletsfly said:
Winning two titles in a row doesn't make city one of the best teams the PL has ever seen.
Click to expand...

She's probably doing it deliberately to get more hits.

Her page is hysterical

only Liverpool fans can achieve this brand of cringe

‘Hi my names Amelia, reporting for the Liverpool Echo. The Square where the Liverpool fans were congregating has been cordoned off because there’s residents that live on it and don’t wish to be bothered into the early hours

Oh btw, didn’t mention our fans acting like complete twats towards the locals’

Yeah, now who's fault is that again?

We lost a dimension that Hendo couldnt replace when Naby went off and Barca knew what they were doing. Reminded me of Ramos doing Salah; he knew we had no answer to it on the bench. That's the truth.
Click to expand...

To best sum up how I feel about this season I would say Liverpool have left me with a bad case of blue balls, they've worked me up into a frenzy, teasing and tantalizing me, then just before the money shot, it's over, all for nothing, now I'm wondering would I have been better off being left alone, enjoyable as it was, the frustration might outweigh the joy I felt during the lustful act.
Click to expand...

SER19 said:
Her page is hysterical

only Liverpool fans can achieve this brand of cringe
Click to expand...

It’s absurd innit, it’s literally a text book example of a non-story made to sound like she’s just witnessed another 9/11.

I know a fair few Liverpool fans and they’re all proper sound in general but they are also whining, victim-playing, drama whores when the moment calls for it.

antohan said:
I wouldn't gloat too much, been dreading this Rodgers-Benitez weekend for weeks now. Leicester can make City drop points. In fact, I'm pretty sure they will

I have the same feeling. I still think Liverpool will get to the title. I hope not but I just can’t get rid of this fear.

SteveJ said:
'And there was laughter across the land...'
Click to expand...

8 hours after the game and I still feel completely crushed.
Click to expand...

I'm not bothered. We've the best manager and team we've ever had. We're on the rise boys and girls and next season we'll win the lot.
Click to expand...

SER19 said:
Her page is hysterical

only Liverpool fans can achieve this brand of cringe
Click to expand...

Should have been 4 or 5 but even so, game over. Klopp is a near and yet so far man. Mind you, next year will DEFINITELY be Liverpool's year.

Albert Steptoe walking past at 10 secs.

Stookie said:
I have the same feeling. I still think Liverpool will get to the title. I hope not but I just can’t get rid of this fear.
Click to expand...

I always thought the 3 games they had v spurs , Utd and Burnley where they could drop some points. I think they’ll win it now , that 3-0 defeat will have an effect on the players no doubt especially as they played well but got punished.
I’m hoping Newcastle will get something from them as he can’t afford to rest players.

Red00012 said:
I always thought the 3 games they had v spurs , Utd and Burnley where they could drop some points. I think they’ll win it now , that 3-0 defeat will have an effect on the players no doubt especially as they played well but got punished.
I’m hoping Newcastle will get something from them as he can’t afford to rest players.
Click to expand...

So you think City are dropping points to Leicester or Brighton?
It doesn't matter what Liverpool do in the league if City win their last two games.

Nickosaur said:
So you think City are dropping points to Leicester or Brighton?
It doesn't matter what Liverpool do in the league if City win their last two games.
Click to expand...

I mean they as in City.

Why are Pool fans moaning about Linekar and Ferdinand celebrating?

One played for Barca and Everton. The other for Man Utd.

They don’t moan about McManaman whose basically one of those sky fan zone commentators.

Will never forget this gem.

Flacco of the Blaggs tribe

More pain to enjoy, persist to the last 5 secs if you can.

clarkydaz said:
how are your morals doing RAWK? show us all next week 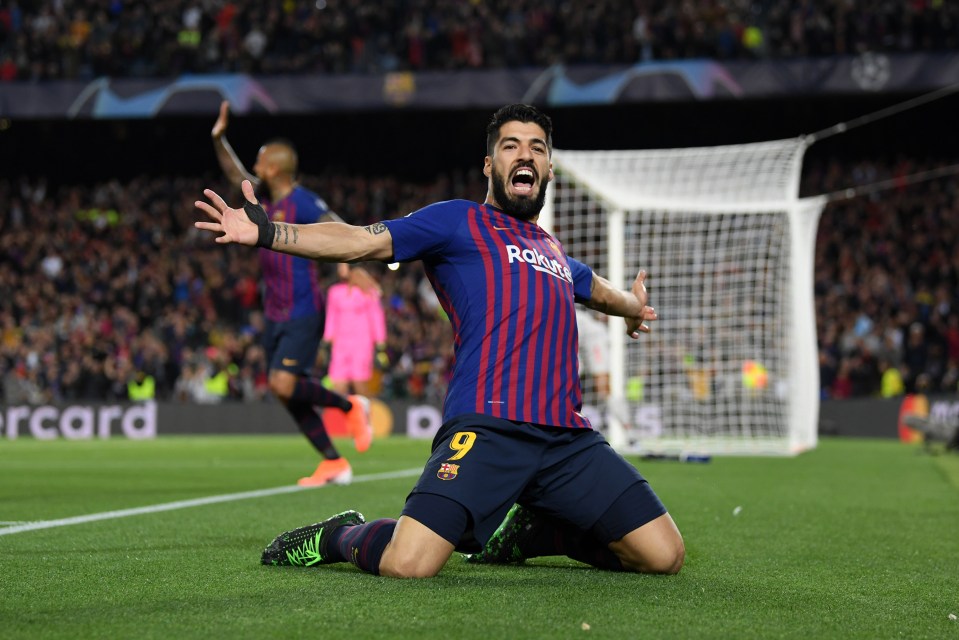 i actually think suarez would have been clever not to celebrate....hes shot himself in the foot
Click to expand...

I’m not arsed that he celebrated. He wasn’t taking the piss out of us or our players, he was celebrating with his team mates. He’s been there 5 years now.

His antics on the pitch were annoying when it was going against us rather than for us but wasn’t arsed by him celebrating.
Click to expand...

I'm not arsed that he celebrated. We know what's he's like and I'd have been shocked if he wasn't what he was like last night. We loved him for it when he played for us. He was our c*nt.

Now he's just a c*nt that plays for someone else. Should be treated that way next Tuesday. Not put on a pedestal like some of our fans do.
Click to expand...

Which is why we all loved him. He was our nasty little fecker. Now he isn`t
Click to expand...

lack of respect,he made his choice....we make ours
Click to expand...

feck him, he's a rat and we need to rattle him cos he gets wound up easily. And Messi can feck off aswell, the little shithouse, rolling around as if he's been shot and waving an imaginary card at the same time. We need to be more cynical like these lot and stop being so nice all the time, Mane jumping up after being fouled in the box, Fabinho getting smacked by Messi and not going down.
Click to expand...

Disappointed with Barcelona. I'm sure they never used to be such a shower of crying, diving, whining shithouses as they were yesterday.

Messi was a complete fecking tit and I think Suarez's dream of walking around Liverpool with his family have gone. The way he acted was pathetic.

If we do lose then I hope a few of our players get properly stuck in anyway. Sad to see such a fine side as Barca sink so low.
Click to expand...

Think that with someone like Suarez the best approach is to humble him. He thrives on hatred. Show him love and it weakens him . Not us. He struggles with emotional situations. Imagine the whole stadium singing his song. It would feck his brain up. He would be lost. Because it is love which he lacks the most and love which he craves the most too. Although he would not admit that. I think he would cry if his song was sung like it used to be. So it should be. At the end of the day it is what we loved him for. Is just him. How he is. Made me laugh seeing him have a go at Alison who doesn't look like the sort guy who would even fight his way out of a paper bag.
Click to expand...

They will be thinking it's over. 3 - 0, job done. Just wait until they feel what is coming at Anfield. When they come out that tunnel and the noise hits them, they're going to realise this tie hasn't even fecking begun yet. Couple of early goals and we can do this. Can't fecking wait for next week. This is what it's all about.
Click to expand...

They couldn't get out of their own half in the nou camp. Wait until they come to anfield on a smaller pitch on a European night. We will do it. I am very confident.
Click to expand...

BrianMcClair'sBarnet said:
Will never forget this gem.
Click to expand...

How can a human being looks, sounds & thinks like that. He needs to be at the Sea World instead, fascinating creature.

What does that even mean? I'm sure he's terrified.

No Idea For Nickname said:
oh dear..
Click to expand...

brb washing my eyes with bleach.

What fecking noise? every time I watch a game at Anfield it's quieter than the Emirates.

montpelier said:
More pain to enjoy, persist to the last 5 secs if you can.
Click to expand...

Suarez must be bricking it. Some of those Liverpool fans can really boo.

http://www.sportbible.com/football/...messi-to-receive-ban-20190502?source=facebook
The Gospel of Hoof

1Now the days of Brendan (whom is called Brent) drew nigh that he should depart; and he charged Klopp the Bavarian, saying,

2"Depart henceforth to the Camp of Nou and take with thouest thy Gegenpress regiment, that thou shouldst encamp them and destroyeth them in their iniquity."

3"And keep the charge of the LORD Rafa, your God, as it is written in the book of Kop, that thou mayest prosper in all that thou doest, lest laughter once more be heard across the land."

4The Kopites therefore went unto the Camp of Nou to wage war with the Catalonians, intent to smite the Valverde the valour and Lord Leo the Lionheart. The Kopites struck with great numbers, but their weapons were blunt.
And King Leo rose up to meet them, stepped from his throne ladened with colours of blue and scarlet, and struck the Kopites with a mortal blow from seventy cubits distance.

5And thus, the Catalonians laid siege to the Province of Kop, destroying their idols; there was great lamenting and tears. The Kopites proceeded to rend their shellsuit garments, for King Leo and his army sacked the land, and nothing stood anymore in the land, not even the Tower of Babel.

6For the prophecy of old as foretold by Alex the Prophet was shown true. "From the victory march of April 28th, 1990, 10,627 days shall pass henceforth in desolation for the Kopites without victory once more. For not even the coming of Mohammed the Ground-worshipper shall cause them to prosper. There shalt be laughter across the land for all eternity."
Last edited: May 2, 2019
Threadmarks
You must log in or register to reply here.